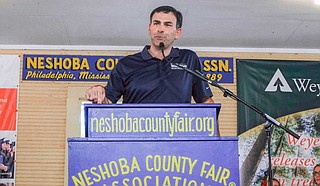 “I’m definitely supportive of moving away from the current system,” Republican Michael Watson told the Clarion Ledger on Tuesday.

Mississippi's 1890 constitution requires a statewide candidate to win a majority of both the popular vote and the 122 state House districts. Without both, the election is decided by the state House.

The process was written when white politicians across the South were enacting laws to erase black political power gained during Reconstruction, and the separate House vote was promoted as a way for the white ruling class to have the final say in who holds office.

Watson is currently a state senator. He won the open race for secretary of state on Nov. 5 and will take office in January. He said he will ask legislators to consider taking steps to change the multistep election process. Because a change would require amending the state constitution, voters would also have to give their approval.

African American plaintiffs filed a federal lawsuit this year to challenge the process, saying it violates the constitutional principle of one person-one vote.

U.S. District Judge Daniel Jordan declined to block Mississippi from using the system during Nov. 5 elections, but said he has “grave concern” about the constitutionality of the process.