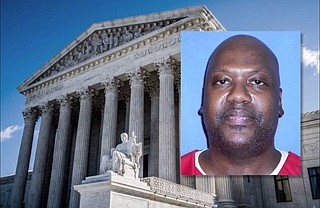 Four black voters and a branch of the NAACP sued a Mississippi prosecutor on Monday, asking a federal judge to order him to stop excluding African Americans from juries.

The lawsuit against District Attorney Doug Evans is an outgrowth of a case where the U.S. Supreme Court overturned a murder conviction of an African American man, citing racial bias in jury selection.

Evans has tried Curtis Flowers six times for murder in a 1996 slaying, charging that he gunned down four people execution-style in a Winona furniture store.

The lawsuit, filed in federal court in Greenville, asks U.S. District Judge Debra Brown to permanently order Evans and his assistants to stop using peremptory challenges to remove African American jurors because of their race. The district is a rural expanse of northern Mississippi that includes Attala, Carroll, Choctaw, Grenada, Montgomery, Webster and Winston counties.

“Other than voting, serving on a jury is the most substantial opportunity that most citizens have to participate in the democratic process,” the complaint says. The plaintiffs are represented by the NAACP Legal Defense and Education Fund and the MacArthur Justice Center.

Evans didn’t immediately respond to an email seeking comment late Monday. He has previously disputed allegations that he sought to exclude black jurors because of their race.

The complaint cites an analysis of jury strikes by Evans from 1992 to 2017 by American Public Media’s “In the Dark” podcast. It found Evans office used peremptory strikes, which lawyers typically don’t have to explain, to remove 50% of eligible black jurors, but only 11% of eligible white jurors. The analysis was performed as part of a series of episodes questioning Flowers’ conviction in a sixth trial, after three earlier verdicts were thrown out and two trials ended in hung juries.

“The statistical disparity in the cases from 1992 through 2017 is inexplicable on non-racial grounds, and court records from jury selection in the fifth circuit court district since 2017 suggest that the practice continues now,” the lawsuit states.

Among the plaintiffs are the Attala County branch of the NAACP, former NAACP state president Charles Hampton and Sharon Young. She was struck from the jury by prosecutors in 2004 in one of Flowers’ trials — a case in which the plaintiffs say Evans used all 15 of his strikes to remove African Americans.

Evans' exclusion of black jurors from Flowers' case was at the center of Flowers' appeal to the U.S. Supreme Court. In an opinion by Justice Brett Kavanaugh, the court ruled 7-2 that during more than 20 years, Evans pursued a "relentless, determined effort to rid the jury of black individuals," with the goal of an all-white jury.

"The numbers speak loudly," Kavanaugh said in a summary of his opinion that he read in the courtroom, noting that Evans had removed 41 of the 42 prospective black jurors over the six trials. "We cannot ignore that history."

Flowers is jailed in Winston County as his lawyers seek bail on the still-pending murder charges and ask to have those charges dismissed. They’ve also asked a state court judge to exclude Evans from the case.

The high court tried to prevent discrimination in the composition of juries in a case known as Batson v. Kentucky in 1986. The court ruled then that jurors couldn't be excused from service because of their race and set up a system by which trial judges could evaluate claims of discrimination and the race-neutral explanations by prosecutors.