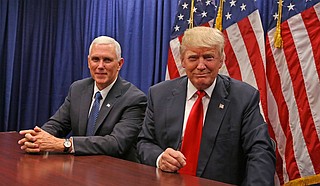 MADISON—President Donald Trump's approval ratings are in the basement, and he could be impeached. But with about a year to go until Election Day 2020, it's too early to write off the tweeter-in-chief.

These are the six closest states that flipped from Democratic to Republican in 2016. In these states, what the polls show about the incumbent and his three leading Democratic challengers includes:

— Joe Biden leads Trump by 2 points among registered voters. This is within the margin of error (2.5 points) and is considered a tie between the two candidates.

— Trump leads Elizabeth Warren by 2 points among registered voters, the same margin as his victory over Hillary Clinton in these states in 2016

— Trump and Bernie Sanders are tied among registered voters, but Trump leads among likely voters.

In national polls, Biden leads Trump by 9 points. But, as the 2016 election demonstrated again, popular vote polls are largely meaningless. U.S. presidential elections are decided in the Electoral College. Polls show Trump's lead in the Electoral College may have grown since 2016. There are many things that could change before 2020. But in the last three presidential elections head-to-head polls a year before the vote have been as close to the final result as those taken the day before.

The Democratic-controlled House is currently holding an impeachment inquiry into Trump's dealings with Ukraine. The goal, clearly, is to knock out Trump before Election Day. I'd rate the likelihood of the House impeaching the president as high.

The case would then move to the Republican-controlled Senate for a trial. A two-thirds vote for conviction would be required to oust Trump. The odds of that, especially so close to Election Day, are low. And it's too early to tell how that might affect the president politically. It might just energize his supporters.

Meanwhile, the Democratic primaries and caucuses won't begin until February. Warren has emerged as the leader among the horde of Democratic candidates. But the people who tell pollsters that they will vote for Biden won't necessarily vote for Warren.

Many Democratic voters (and candidates) say Warren is too liberal. And let's be honest, sexism and lack of "likability" also hurt Warren in these polls. One respondent called her a "Hillary Clinton clone." That was not intended as a compliment.

Trump won the battleground states in 2016 because the majority of white, working-class voters—long a key Democratic support group—voted for Trump. Polls show that those voters still back Trump, which is bad news for Democrats. They probably need to win three of those states to win the White House.

While considering these polls, consider this: in 2016, most polls showed Clinton leading going into Election Day. The reasons ranged from wishful thinking by pollsters to bad numbers because many Americans refused to take part in polls. The chances of getting a more accurate sample size this time are low, unless the government outlaws caller ID.

The only numbers that count, whether in Congress or at the polls, are months away.

Charles Corder is a longtime reporter and editor. Contact him at [email protected].