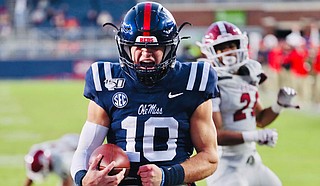 Each four-year university and college nominated one player to be a finalist for the 2019 Conerly Trophy. Two of the finalists got a national spotlight on Thanksgiving night as Mississippi State University and the University of Mississippi battled in the Egg Bowl.

MSU running back Kylin Hill, named the Bulldogs finalist for the Conerly Trophy, enjoyed a nice game with 132 yards on 27 carries. Even without getting into the end zone, Hill's hard running helped set up the Bulldogs offense in scoring positions.

The Rebels finalist, quarterback John Rhys Plumlee, started the game and played well for the most part. Plumlee finished the game 9-for-14 passing for 121 yards and 31 yards rushing on 18 carries with a touchdown.

Even with Plumlee's solid game, he did have a costly fumble after getting sacked, and the Rebels replaced him late in the game with Matt Corral when it became a passing contest. The 2019 Egg Bowl ended up being decided when the Rebels were flagged for unsportsmanlike conduct when UM wide receiver Elijah Moore lifted is leg pretending to lift his leg like a dog, forcing a long extra point try that the team missed.

The future looks bright, though, for the Hattiesburg, Miss., native as Plumlee took over the starting quarterback job in week five of the season. His legs have been a major weapon for the Rebels as he leads the team in rushing with 989 yards and 11 touchdowns.

His rushing yards rank him fourth in the Southeastern Conference, and his rushing touchdowns are good enough for second in the conference. He is just the fifth quarterback in the SEC to produce a four rushing touchdown game in the last 20 years.

Plumlee has completed just 51percent of his passes this season and completed 70-of-136 passes for 789 yards with four touchdowns and three interceptions. Even starting most of the season, Corral will end up leading the team in passing.

The former Oak Grove High School star rushed for over 100 yards in five games and rushed for career highs with 212 yards and four touchdowns against Louisiana State University. Plumlee failed to pass for more than 150 yards in any game this season with his career-high of 141 yards coming against the University of Alabama.

(The decision will come through a) combination of fan voting and sports media representatives, with fans being able to vote three times per day until Sunday, Dec. 1, at noon.

Those interested in attending must purchase tickets in advance; they will not be sold at the door. You can buy tickets at the Mississippi Sports Hall of Fame and Museum in Jackson or purchase tickets online at www.msfame.com.

The C Spire Conerly Trophy is awarded to the most outstanding college football player in Mississippi. The winner will be announced Tuesday, Dec. 3, at the Country Club of Jackson.