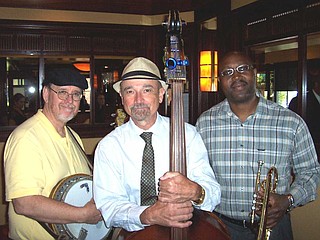 The Jackson local music scene is constantly evolving, with new acts springing up each year and with veteran ones continuing to make waves. This overview covers a handful of music artists who are from and perform in the Jackson metro area.

In the 1920s, '30s and '40s, jazz proliferated in the streets of New Orleans, as second-line bands strolled through the French Quarter. Every Sunday at 11 a.m., the doors of Char Restaurant become a gateway that transport visitors from present-day Jackson, Miss., to the Crescent City of that era—all thanks to the weekly performances by Big Easy Three.

The trio is comprised of Bob Pieczyk, upright bass and supporting vocals; Tim Avalon, four-string banjo and vocals; and Terry Miller, trumpet and lead vocals.  The group plays traditional New Orleans jazz, ala the 1920s-1940s, including arrangements from artists such as Louis Armstrong and King Oliver.

The band formed eight years ago when Char reached out to Pieczyk to see if he could assemble some musicians to play live jazz at the restaurant after the group that had been playing at the venue found a new location. Pieczyk contacted Avalon and Miller, and Big Easy Three was born.

Since then, the band has played at other venues and special events over the years. On Sept. 24, Big Easy Three performed at a charity fundraiser that Southern Christian Services held at the Country Club of Jackson.

Notably, the group has also been solicited to play at funerals. A woman whose father had passed away asked the trio to do so for the first time because her father loved and would often travel to New Orleans.

"She said, 'We're looking for something—this is the music that Daddy loved,' and we did the whole thing. We did the walk (from the church to the gravesite) and played 'The Saints Go Marching In' ... I was astounded that it had the kind of impact it did. It was really, as they say in New Orleans, a celebration of someone's life rather than a sad affair," Pieczyk says.

Silver and Lace, a multi-genre band that performs songs both older and newer, added itself to the list of local talent earlier this year after forming in the spring and making its public debut in June. Five-foot tall "powerhouse" Jamie Waltman fronts the band as lead vocalist.

Besides Waltman, the band consists of Bob Buseck as a guitarist, Wesley Ray as lead guitarist, Andy Halstead as bass guitarist and William Waddell as drummer.

The group formed earlier this year after a chance encounter between Waltman and Buseck. Buseck, a member of another local band named Silvertree Crossing, was playing at Pelican Cove while Waltman was in the audience. Waltman asked manager Don Getty if she could go on stage to sing with the group, and she did. Afterward, Buseck, who had been looking for a female singer to lead a new band, reached out to Waltman. The two realized they had good artistic chemistry and went forward with the project, arriving at Silver and Lace.

While the band focuses on country and rock, the members have created a set list of about 50 songs that showcase a variety of genres.

"We have a lot of people say that they like the different genres of music we have to offer and that it's just a fun crowd. They just like to come out and hear us sing and that it makes for a good time," Waltman says.

So far, Silver and Lace primarily prefers to play outdoor venues as well as special events like weddings.

"The last show that we played in Jackson, a guy actually proposed to a girl," Waltman says. "He wanted us to sing and him pop the question while we were there, so we did. They actually asked for us to play their wedding in the spring. So that's something cool that we're looking forward to doing."

For more information, find Silver and Lace on Facebook.

Anissa "Big Sexy" Hampton gravitated toward performing at a young age, singing in front of the mirror when she was 2 years old, so says her mother. After a career singing background vocals for artists such as Willie Clayton, Calvin Richardson and the Keeshea Pratt, she elected roughly four years ago to stand centerstage as a soloist and as of two years ago lead Anissa Hampton and the H Funk band.

Born in Chicago, she and her family moved to Jackson when she was about 10 years old and have remained in the area ever since. Growing up, Hampton was surrounded by music. The household had a collection of several dozen vinyl records, encompassing a number of genres like blues, soul and more. Her father Charles Hampton Sr. was a country music fan, so she grew up hearing artists like Shania Twain, Randy Travis and Dolly Parton. Hampton herself, however, loved artists like Whitney Houston and Anita Baker, and she owned all of their releases on cassette tapes.

As a group, Anissa Hampton and the H Funk band primarily describes itself as playing within R&B and southern soul genres, largely thanks to her upbringing.

"I've been exposed to all these genres, so I feel that I should play those genres in my performances and (have them) in my repertoire of music," she says.

She graduated from Provine High School in 1990 and then attended Tougaloo College, where she began pursuing music more actively. After a hiatus from school, she enrolled in Jackson State University, where she earned a bachelor's degree in interdisciplinary studies in 2011 and a master's degree in technology education in 2014. She currently works as an administrative assistant in JSU's graduate studies department, while she works toward a second master's in hazardous materials, which she is set to receive this December.

"I really like to be laid back, listen to their shows, see how their crowd gets happy and excited. It's pretty much supporting them as well," she says. "... A lot of them have started coming to my shows, so it's like us showing them support when they show you support. We're trying to keep that up locally so that we can let each other know how we appreciate them and they appreciate us."

Hampton notes how the local music scene in Jackson is a community and that she is thankful to be a part of it.

"To me, it lets me know that I'm not out there by myself. It lets me know that people outside of family are supporting me, and a lot of the artists in Jackson need that because there are so many of us in this type of genre of music, in R&B and blues, and it's a lot coming up. So it's just something that's very comforting to have," she says.

Anissa Hampton's next performance will be at Johnny T's on Oct. 18 starting at 10 p.m.

Malik Nichols, who has been making a name for himself in the Jackson hip-hop scene in the last year or so under his stage name King Drastic, found himself introduced to hip-hop at an early age.

"Music has always been part of my background. My father is a big music person, put me on a lot of singers like Prince and the Temptations. And then around 6 or 7 (years old), he gradually put me towards hip-hop," he says. "Around my sophomore or junior year of high school, I started actually writing (music) myself, just to see if I could actually do it or not.

The 28-year-old Jackson native graduated from Lanier High School in 2009 and shortly after joined the U.S. Air Force. He was officially inducted on Feb. 15, 2011, and he separated from the military exactly six years later, to the day. In August 2017, he enrolled at Jackson State University, where he is currently pursuing a degree in health education.

He distanced himself from music when he first joined the Air Force but returned to it toward the latter part of his service. He released a 10-track EP titled "Unfinished Business" using purchased beats in 2015. After separating from the military, he began working on his music more seriously, completing and releasing a full-length album self-titled "King Drastic" in 2018.

All of King Drastic's songs are originals, with Nichols writing the lyrics. John Maynier—otherwise known as Mayniac On The Track—produced the music for "King Drastic" and is continuing to do so for the artist's future releases.

"I have a lyrical foundation," Nichols says. "I'm really into punchlines and wittiness and being able to create a story, but I've also found a way to infuse that with a Mississippi sound, if you can say that. My music is more on the uplifting side. ... I try to find a way of getting my message across and getting my lyrics across but in a way that be easier to the ear and easier for people to accept as far as the sound of it."

Since 2018, King Drastic has performed for Hal & Mal's "Country Cousins" series, Jackson Indie Music Week and other venues and events, including a showcase that Neak, a Chicago-based hip-hop artist, held at Conkrete on Sept. 7.

King Drastic is set to release another full-length album titled "BLVCK GRAFFITI" in early November, and he is working on a three-song project where he will collaborate with fellow local hip-hop artists Vitamin Cea and King Blamah.