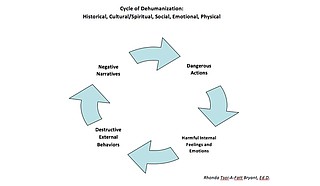 Dehumanization of young people of color is a vicious cycle. We each must play a role in stopping it. Photo courtesy Dehumanization Cycle

Back when he was chairman of the Republican National Committee, Haley Barbour wrote a book laying out his "Agenda for America: A Republican Direction for the Future."

In the tome, he chided the notion that the nation by the mid-1990s still needed to think about race relations. The continued use of "civil rights" had become a "not-too-subtle code word for 'special preference,'" Barbour wrote. It was an ironic reference for a Reagan boy who wasn't nearly as worried about that president's race-baiting campaign against "welfare queens" and warning of that "strapping young buck" who was supposedly buying T-bone steaks with food stamps with white people's tax dollars.

In his musings on crime, Barbour whined about the nation being turned into the "Great Rehabilitator" of the vicious "predators" roaming our streets, and calling for drug users to be locked up. He complained about the 1994 crime bill including "funding for basketball leagues" among its draconian measures that resulted in black and brown drug users being locked away from their families for decades.

It was a watershed year for "predator" hysteria, with conservative think-tankers creating hysteria over black "super-predators" overtaking the nation by the year 2000. The superpredator myth was bunk (crime was already free-falling by 1996), but the rhetoric gave Bill Clinton's re-election campaign a run for his money.

Such classic dehumanization, using language and lies that peg certain young people as "animals," had helped justify enslaving, beating, raping and hobbling black people since the time of Jamestown. By the time Donald Trump ran for president again in 2015, "animal" and "thug" language for certain young people was embedded in the psyches of many white Americans. It justifies ridiculously horrific and racist police and civilian shootings of unarmed black people for many white folks, and it's the reason that every single black mother has "the talk" with her sons before he leaves the house alone or with his friends. (Read Karla McCullough's poem in our current issue.)

I sat on a panel recently about the dehumanization of young people of color, due to my research on these issues and my work with the Mississippi Youth Media Project where teenage Jacksonians do deep work to dispel false narratives about themselves and their communities. We followed a powerful presentation by Dr. Rhonda Tsoi-A-Fatt Bryant, one of the researchers behind the Dehumanization Cycle project, that didn't pull a single punch about the roots of dehumanization and what it results in—all of which must thrill racists who want an excuse for their supposed superiority, but should alarm the hell out of the rest of us.

Dr. Bryant talked about it as a systemic cycle, which frankly is the only way to solve pretty much anything that matters. Negative narratives spill into dangerous actions, then harmful internal feelings and emotions that lead to external reactions, and the cycle continues. It's logical: Society expects children of color to act like animals; that causes what Dr. Bryant calls "racialized trauma"; and it can lead to failure to thrive.

To bring Dr. Bryant's work to life, go read Aliyah Veal's staggering cover story where she explores the tragic and seemingly nonsensical murders of rappers starting to succeed by members of their own community. Just as hard-working rappers—and teenagers work very hard at this, often seeing it as a way out of a bad situation and to give back to their communities—start to make it, they can face a backlash of bickering, jealousy, back-biting, trash talk and even violence. 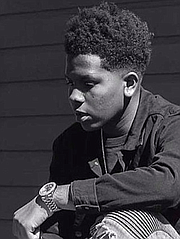 From Nipsey Hussle to Lil Lonnie, rappers’ deaths are sobering, but those lost still inspire.

This problem, of course, is not limited to young people of color. Many people of all backgrounds in Mississippi get agitated at people putting in the work to be successful and impactful, but this human malady coupled with societal dehumanization of young people of color is a poisonous mix, and it's a daunting cycle to break.

Politicians like Barbour and a certain white male candidate I sparred with on our website years ago about the harmful effect of rap and drug use—while I knew the whole time he and his wealthy buddies gathered on weekends at his "farm" to toke on a few numbers themselves outside public view—want to blame the very people that their rhetoric has long dehumanized.

We're hearing a lot these days from conservatives who support "re-entry" options for people long incarcerated, often based on that 1994 crime bill that Haley Barbour believed in 1996 didn't go far enough. What we don't hear nearly enough about, especially from white GOP politicians, is the necessity of busting the false narratives that help them scare white people into voting for them and out of believing in the young people who need it the most.

Dehumanizing other human beings, as Trump does with about any person of color who dares criticize him, is ripping our country apart, just like it did during the Civil Rights Movement and back when the South fought the Civil War to continue its right to dehumanize and enslave human beings and to force new states to allow it.

People are not "aliens," "predators" or "animals." Humans engage in bad behavior. It is not because they are born to do those things; it is too often due to a lack of education or opportunity, whether it's a young person in a crumbling school that cannot afford to keep good teachers or a politician who gets his racist memes and assumptions from Tucker Carlson, Donald Trump's tweets or that trash book by Barbour.

The irony of Barbour's book? It was produced by the National Policy Forum, an RNC group that eventually shut down after it was caught funneling foreign money into helping Republicans take Congress in 1994, all the white using racist memes to attract white voters.

Dehumanization can indeed pay off for some horrific, greedy people in the short run. But it hurts all of us over time.

Call it out for what it is: racist trash.