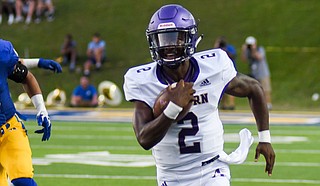 Alcorn State University starting quarterback Noah Johnson went down with an injury during a game against McNeese State University. Johnson's injury thrust junior quarterback Felix Harper into the position of quarterback against McNeese State. Harper finished the game with 13-of-28 passing for 132 yards with two touchdowns and two interceptions. The Braves fell 17-14 after a furious comeback that included two fourth quarter touchdowns.

With Johnson still injured and unable to play in Alcorn State's next game against Prairie View A&M University, Harper made his first career start, completing 25-of-37 passes for 280 yards with two touchdowns and no interceptions.

The Fairburn, Ga., native rushed for another score as he ran eight times for 18 yards. Alcorn State held on for the 45-41 win to start SWAC play with a victory. Harper threw the game-winning score with just 40 seconds left to play in the game.

Braves senior linebacker Solomon Muhammad was named SWAC Defensive Player of the Week and senior kicker Corey McCullough earned SWAC Special Teams Player of the Week. It was the eighth straight win in a conference opener for the Braves.

Alcorn State was still without Johnson against Mississippi Valley State University. Harper got his second straight start against the Delta Devils and a chance at 2-0 start in SWAC play.

The junior threw for a career-high 396 yards on 21-of 30 passing with six touchdowns and no interceptions. Harper helped the Braves pull away in the second half as Alcorn State won 45-19 over the Delta Devils to stay perfect in conference play.

The win is the sixth straight home win for the Braves. Alcorn State has earned five conference player-of-the-week awards over the last two weeks.

Harper has appeared in four games this season with two starts. He has completed 60 of 96 passes for 809 yards and 10 touchdowns with just two interceptions. The quarterback has added 15 rushes for 31 yards and a touchdown.

The team is 3-2 overall and 2-0 in SWAC play with an early lead in the SWAC East. Alcorn State hits the road and looks for a 3-0 start in conference play as the Braves battle Alabama State University with a 2 p.m, kickoff on Saturday, Oct. 5.

Alcorn State returns home on Oct. 12 against Savannah State University in an out of conference contest.