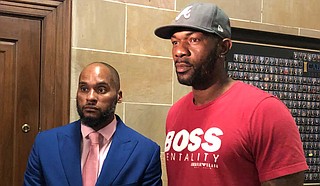 Dennis Sweet IV and John Knight, father of John Knight III, address reporters outside of a Hinds County courtroom after a judge ruled that a lawsuit accusing the City of Jackson of police brutality will move forward. Photo by Seyma Bayram

A lawsuit accusing the City of Jackson of police brutality will move forward after a hearing this morning. Senior Hinds County Circuit Judge Tomie Green denied the City's motion for summary judgment and ruled that the City must hand over evidence in a case involving a Jackson police officer, who was convicted of assaulting Jackson teenager last year.

On May 13, 2018, JPD Officer Vincent Lampkin beat John Knight III, a 19-year-old Jackson resident, during an unlawful traffic stop. Lampkin did not tell Knight why he pulled him over and brandished his gun during the encounter, the complaint alleged. After ordering Knight to exit the car, Lampkin placed his foot on his head and neck and punched him while he was in handcuffs. Eventually, Lampkin took off the handcuffs, told Knight he could leave and left the scene in his police car.

A Hinds County Court sentenced Lampkin to one year after an assault conviction in September 2018. Knight, a former Callaway High School student, is currently attending Utah State University, where he plays on the basketball team.

Deputy City Attorney J. Richard Davis, who represented the City of Jackson, argued that the court should grant the City immunity for employee conduct if the employee's conduct violated the terms of employment. He argued that, because Lampkin's conduct constituted malice, he assaulted Knight in his capacity as a citizen and could therefore not be considered a city employee. The Jackson Police Department employed Lampkin at the time of the beating, and he was in uniform.

When Judge Green dismissed the City's argument, Davis stated that the City would file an interlocutory appeal in the Supreme Court.

Dennis Sweet IV, who represents Knight, was pleased with the ruling. "We don't believe they have a good argument, we think they're just trying to prevent discovery," Sweet told reporters. "I think this case is going to unveil some misbehavior from the City of Jackson that they're trying to cover up, and they're trying to hide. That's why they don't want to give discovery. But the court saw through it, the court demanded that they give us our discovery."

Sweet, who also supported Mayor Chokwe A. Lumumba's candidacy, referred to the possibility of an interlocutory appeal as "an extreme measure" to avoid having to give up discovery.

"We heard that this officer was (cited) several times, we heard he had misconduct all throughout north Jackson," Sweet told the Jackson Free Press after the hearing. "And we believe that the City left him on as an employee, kept him hired, knowing that he was a ticking time bomb. We also believe he investigated other cases, and they know if they turn that discovery over, it'll hurt every case he investigated. But that's just fair. If you have a bad apple or a spoiled root, you have to pull it, or else everything is going to be tainted."

The victim's father and mother, John and Toshia Knight, were present at the hearing.

"We're glad they ruled it in our favor, because we are going to get to the bottom of this, not just my son's assault, but other citizens that possibly were assaulted by the same officer," father John Knight told reporters. He added that he believes the City is trying to cover up additional issues involving the same police officer.

"If you're an officer ... you're supposed to protect us, you're here to serve us, you work for us. It's not good for no officer to violate any person's rights," he said.

The City of Jackson has 45 days to meet with the plaintiffs to determine a scheduling order for handing over evidence.