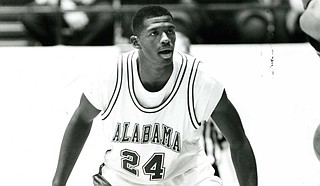 As the new NBA season kicked off on Tuesday, Oct. 22, it seems fitting that the Mississippi Sports Hall of Fame announced its 2020 class. One of the headlining athletes is former NBA player Antonio McDyess.

The Quitman, Miss., native stared at Quitman High School and was a 1993 Second-Team Parade All-American as one of the best players in the nation. McDyess chose to play at the University of Alabama for the next step of his basketball career.

McDyess played and started in all 33 games for the Crimson Tied as a sophomore. He averaged 13.9 points, 10.2 rebounds and two blocks per game. He ends up being named 1994-1995 Second-Team All-SEC and 1995 All-SEC Tournament Team.

After his sophomore season McDyess decided to forgo his final two years of college and enter the 1995 NBA Draft. McDyess worked his way up draft boards and ended up being the second player taken in the draft.

The Los Angeles Clippers selected the former Crimson Tide star and then traded him to the Denver Nuggets. McDyess played in 76 games and started 75 games as a rookie as he averaged 13.4 points, 7.5 rebounds, 1.5 blocks and one assist per game. His play earned him First-Team All-Rookie honors.

McDyess joined the 2000 USA Olympic Team that won the gold medal in the Sydney Games. He reached his only All-Star game during the 2000-2001 season as he averaged 20.8 points, a career-high 12.1 rebounds, 1.8 assists and one steal per game.

His promising career took a different turn in the 2001-2002 season as the forward played in just 10 games before missing the rest of the season due to a knee injury. McDyess would miss the entire 2002-2003 season still recovering from his injury.

Finally able to return from injury in the 2003-2004 season, McDyess spent time with both the New York Knicks and Suns. McDyess would spent the next four seasons with the Detroit Pistons and play in the 2005 NBA Finals but come up short as the San Antonio Spurs took the title.

McDyess went on to play for the Spurs for the 2009-2010 and 2010 and 2011 seasons. The injuries to his knees derailed what could have been an even more impressive career.