Lumumba Vows to Fight Corruption, Cites Progress in 'State of the City' 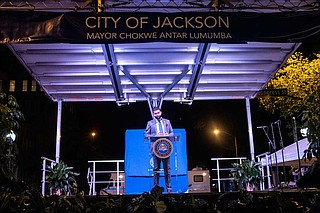 In his third State of the City Address, Mayor Chokwe A. Lumumba vowed to continue fighting corruption while celebrating wins for public schools, infrastructure and more. Photo by Seyma Bayram

Corporations and other bad actors will no longer take advantage of Jackson, Mayor Chokwe A. Lumumba pledged to a crowd during his third State of the City Address yesterday evening. It was one of several references Lumumba made to the City's lawsuit against Siemens Inc. over the ongoing water-sewer crisis. His speech also celebrated infrastructure improvements, highlighted roads repairs, and emphasized the importance of collectivity and integrity in ushering the City of Jackson toward greater economic development and justice.

About 100 people gathered in downtown Jackson to hear the mayor's remarks. The venue, a parklet at the intersection of Congress and Capitol streets, signified recent economic development in the city, Lumumba said, pointing to new eateries and other businesses in the area.

"These last two years have not been easy," Lumumba said, "... but I'm proud to report that Jackson, Mississippi, is turning the corner."

Lumumba's speech focused on the City's efforts to address the water-sewer crisis, the state of Jackson Public Schools, the Jackson Zoo, infrastructure and redevelopment progress, and policing and crime.

"We will not be taken advantage of by corporations who promised the world only to sell us tools that we cannot afford and do not work," Lumumba told attendees, referring to the City's ongoing lawsuit against Siemens Inc. for its faulty work that led to the water-sewer crisis.

In 2013, under the administration of then-Mayor Harvey Johnson Jr., the City of Jackson entered into a $90-million dollar contract with Siemens Inc. to install new water meters, upgrade the water-sewer infrastructure and implement a new water-billing system. The new billing system turned out to be faulty, with many residents receiving no bills for months or years. Many who did receive bills reported unusually high fees. As a result, residents did not pay thousands of bills—totaling nearly $50 million, the City reports—causing significant shortages in the city's revenue source.

On June 11, the City filed a $225-million lawsuit against Siemens Inc. and its subcontractors over losses stemming from the water-sewer crisis. Days later, on June 18, Jackson residents filed their own lawsuit against the City to prevent their water from being shut off over inaccurate bills.

Earlier this month, the City unveiled a new water-bill debt repayment plan for residents who had delinquent accounts and want to avoid water shut-off. Lumumba called the plan "compassionate" and "consistent" during his address.

Lumumba prefaced his remarks on the Siemens lawsuit by reminding attendees that he ran on an anti-corruption platform. He also referenced Jackson's past as a city that bad actors have historically "pillaged" and "plundered," including those from within the community—likely a reference to the local subcontractors named in the lawsuit. He vowed to continue fighting corruption, not just in the Siemens case but elsewhere.

The mayor celebrated the improvement of Jackson Public Schools, the second-largest school district in Mississippi, in his address. The district was facing a potential state takeover when Lumumba first entered office. Last year, the Mississippi Statewide Accountability System, an A-F grading system that evaluates student achievement, gave Jackson Public Schools an "F" rating. But last September, Jackson earned a rating of "D," owing to increased proficiency in math and higher graduation rates in the district, among other markers of improvement.

Lumumba praised the Jackson Public Schools Board of Trustees for leading school-improvement efforts, calling it the "best" board in the district's history. He lauded the board and community's work to help pass a 2018 bond referendum to raise $65 million for Jackson Public Schools. The referendum passed with 86% of the vote, and the district is using the funds to repair and renovate JPS buildings.

The mayor also spoke of the Jackson Zoo, which has been closed for almost one month as it waits for its new operator, the Dubai-based ZoOceanarium Group Inc., to obtain a license from the U.S. Department of Agriculture. The zoo will reopen and stay in west Jackson "where it belongs," Lumumba pledged.

Lumumba acknowledged the issue of violent crime in Jackson and shared his own family's experiences. His own older brother was shot in the head in Jackson several years ago and left paralyzed.

"I want you to know that every time we lose a Jacksonian to senseless violence, I mourn with you each time a life is lost," he told the crowd.

Lumumba pointed to new cars and body cameras for Jackson Police Department officers as evidence of a focus on increasing police resources and accountability. He added that the JPD, which has long been plagued by officer shortages, had graduated its first class of recruits in four years. This week, the City is installing cameras in south Jackson for real-time monitoring by the police, he added.

The mayor said that "you simply can't 'out police' crime," suggesting that stopping criminal activity requires more solutions than just more cops or police resources. "By the time police come, the damage has been done," he said.

To this end, the City has partnered with the People's Advocacy Institute, his sister Rukia Lumumba's nonprofit, to fund and launch credible-messenger and violence-interruption programs. Credible messengers, many of whom have been formerly involved in the criminal justice system, conduct on-the-ground outreach to dissuade individuals from taking part in criminal activity.

Crime is a symptom of larger, systemic issues, Lumumba reminded attendees. In Jackson and elsewhere, efforts to reduce crime must include efforts to end poverty, he reiterated.

Roads and Other Improvements

The mayor's speech also highlighted several other positive developments, both current and forthcoming, that he said would stimulate Jackson's economy and improve residents' quality of life.

Lumumba told attendees that his administration has repaired more roads than any other administration in the past 20 years. He pointed to a recent $40-million loan that the City received to continue repairing roads. Hinds County has experienced a 3% growth in property taxes, a growth rate currently higher than Madison County, the mayor said. Farish Street is slated for major redevelopment. The City will acquire new, energy-efficient public transportation buses. Downtown Jackson will offer free WiFi.