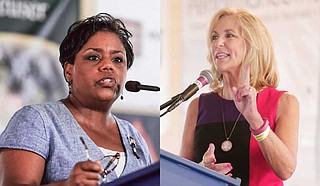 Democrat Jennifer Riley Collins (left) is a military veteran and former executive director of the American Civil Liberties Union of Mississippi. Her opponent, Republican state Treasurer Lynn Fitch (right), was a staff attorney for the Mississippi House Ways and Means Committee and director of the state Personnel Board. Photos by Ashton Pittman and Imani Khayyam

JACKSON, Miss. (AP) — Democrat Jennifer Riley Collins says one of her priorities, if elected Mississippi attorney general, will be ensuring law enforcement officers receive the equipment they need to do their jobs — items like bullet-resistant vests that can be purchased by combining state or local money with federal funds.

She says she also wants to ensure that officers receive training that could help them better connect with communities of color.

"For me, it's about making sure everyone comes home safe," Collins told The Associated Press in a recent interview at the state Capitol.

Collins, 53, is a military veteran and former executive director of the American Civil Liberties Union of Mississippi. She faces Republican state Treasurer Lynn Fitch, 58, in the Nov. 5 election. The winner will succeed four-term Attorney General Jim Hood, who's now the Democratic nominee for governor.

With either Fitch or Collins, voters will elect the first woman to be Mississippi attorney general. Collins also would be the first African American statewide official in Mississippi since Reconstruction.

Collins said the youngest of her three sons, who just turned 21, was 19 and attending college in Atlanta when he went to buy dog food one evening in a luxury car he owns. She said a police officer pulled him over and despite her son having the proper paperwork, the officer confiscated the car. Collins said her son called her while he was still in the car and the officer was making demands. She pleaded with her son to obey, for the sake of his own life.

The family later retrieved his car, but the traumatic encounter remains vivid in Collins' mind, and she said she knows her family's experience is not unique.

"No mother should ever have to scream, 'Please comply. Don't die,'" she said.

Collins served 14 years on active duty in the Army and 18 in either the Guard or Reserve. She retired in June 2017 as a colonel.

"Are you putting yourself in a posture where you are being received by community," she said, "or are you showing up and treating community like they're enemy combatants?"

Fitch was traveling to campaign last week, and a spokesman said she didn't have time for an interview with the AP but would answer questions in writing. Asked for a response about whether she thinks officers need the kind of training Collins mentioned, Fitch, who is white, wrote: "As attorney general, I will support our law enforcement community. I believe that proper training is important for everyone and will be a priority of mine."

During a 34-year career, Fitch has worked in the public and private sector. She was a staff attorney for the Mississippi House Ways and Means Committee, was a special assistant attorney general and spent two years as director of the state Personnel Board before she was elected treasurer eight years ago. She said as treasurer, she saved the state money by restructuring debt.

"I will bring the same conservative principles and solution-driven approach to the attorney general's office to tackle great challenges like the opioid crisis and human trafficking," Fitch said.

Fitch said soon after she finished law school, she got to know former Lt. Gov. Evelyn Gandy, a Democrat who was the first woman to hold that office.

"She was a mentor and friend and I learned from her the vital power of partnerships to do good things," Fitch said. "As attorney general, I want to bring all parties to the table to make sure no solutions are left unstudied and no challenge is left unaddressed."