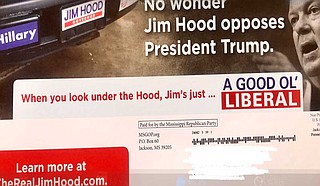 The Mississippi Republican Party is behind a recent campaign mailer with a photo of Democratic gubernatorial nominee Jim Hood's face next to a photoshopped set of bumper stickers on the back of a truck. Hood's own bumper sticker is in the center, with Hillary Clinton and Barack Obama bumper stickers on either side.

"No wonder Jim Hood opposes President Trump. When you look under the Hood, Jim's just A GOOD OLE LIBERAL," the bumper sticker reads.

The flipside of the mailer claims that "Jim Hood's views are just like those of national liberal Democrats." Under that heading, the mailer ascribes positions to the Democratic candidate that he has not expressed in this race, including national issues unrelated to Mississippi.

Several of those claims, including on abortion, are false.

In the weeks before the Republican runoff for governor, Lt. Gov. Tate Reeves flooded Mississippi GOP voters with false mailers about his opponent, former Mississippi Supreme Court Chief Justice Bill Waller. The mailers depicted the conservative jurist as a liberal and attempted to tie him to former President Barack Obama and other national Democrats like Congresswoman Alexandria Ocasio-Cortez and U.S. House Speaker Nancy Pelosi.

With Reeves now the Republican nominee, the Mississippi GOP appears to be trying to replicate the anti-Waller strategy in mailers targeting Hood.

The mailer claims that Hood "supports using tax dollars to pay for abortion services." This claim is doubly false; Hood calls himself "pro-life," and has repeatedly defended Mississippi's abortion bans in federal court, even as he declined to defend laws with which he disagreed. His office is currently defending controversial abortion laws, including a 2018 law that banned abortion after 15 weeks of pregnancy and a "fetal heartbeat" law that Gov. Phil Bryant signed earlier this year, which bans abortions once a heartbeat is detectable—around six weeks.

"I've defended every bill the Legislature has passed on abortion. That's my duty as attorney general," Hood said at a Jackson luncheon in February, adding that he does not "personally believe abortion is right."

The claim that Hood "supports using tax dollars to pay for abortion services" stems from a comment he made in 2016, in which the Enterprise-Journal reported that he called a bill to defund Planned Parenthood a "stupid bill." That legislation was unrelated to abortion funding, though; U.S. law already bans federal funds from paying for abortion services. Defunding Planned Parenthood would only bar it from receiving funds for other services, like cancer screenings, contraception and other health-care needs. The mailer falsely implies that federal funds pay for abortion and that Hood supports it.

At the same luncheon in February, though, Hood said he would not focus on abortion if elected governor; that is for the courts to decide, he said.

'All He Can Do is Try to Scare People'

The mailer also claims that Hood supports "raising taxes on gasoline and diesel fuel." That claim is partly true. Hood says he would only support raising the gas tax to pay for infrastructure as a last resort. Instead of raising the gas tax, he said in August, he would like to repeal the corporate franchise tax cut that Reeves championed in 2016.

Another national issue the mailer highlights is immigration, claiming that Hood supports "giving legal status (amnesty) to millions in our country illegally" and "(opposes) stronger border security." Hood has not staked out positions on these issues, as immigration is a federal issue, and Mississippi does not share a border with Mexico.

"All he can do is try to scare people," Hood said to the Jackson Free Press in a statement on Monday about Reeves. "He's running a negative campaign because he can't run on a record where he's actually done anything. He can't talk about keeping rural hospitals open because five have closed, and five were in bankruptcy just last year. He has to revert to scare tactics and throw around labels while I'm talking about issues and fighting for working families."

The Reeves campaign did not respond to a request for comment for this story.

The election for governor and other statewide offices in Mississippi is on Nov. 5. Anyone who registered to vote by Oct. 7 is eligible. To cast a ballot, voters must bring a state-accepted form of photo ID.

Voters will also choose new leaders in the race for attorney general, lieutenant governor, treasurer, secretary of state, and other statewide offices on that day. All Mississippi House and Senate races will also be on the ballot.