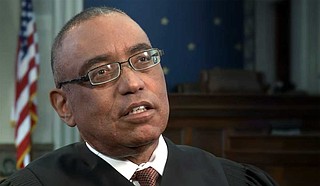 MONTGOMERY, Ala. (AP) — A federal judge on Tuesday blocked Alabama's near-total abortion ban from taking effect next month and called the law—part of a wave of new abortion restrictions by conservative states—clearly unconstitutional.

U.S. District Judge Myron Thompson issued a preliminary injunction temporarily blocking Alabama from enforcing the law that would make performing an abortion a felony in almost all cases. The ruling came after abortion providers sued to block the law from taking effect Nov. 15. The injunction was widely expected and will remain in place until Thompson decides the full case.

"Alabama's abortion ban contravenes clear Supreme Court precedent," Thompson wrote in an accompanying opinion. "It violates the right of an individual to privacy, to make choices central to personal dignity and autonomy. It diminishes the capacity of women to act in society, and to make reproductive decisions. It defies the United States Constitution."

Energized by new conservatives on the U.S. Supreme Court, Alabama and other conservative states have attempted to enact new restrictions on abortion in the hopes of getting Supreme Court justices to reconsider Roe v. Wade, the landmark 1973 decision that legalized abortion nationwide.

A number of states attempted to ban abortion once a fetal heartbeat is detected. The Alabama law went further by attempting to ban almost all abortions with no exceptions for cases of rape and incest.

Passed by the Republican-led legislature, the 2019 Alabama Human Life Protection Act would make performing an abortion at any stage of pregnancy a felony punishable by up to 99 years or life in prison for the abortion provider. The only exceptions would be when there is a serious health risk to the mother or the fetus has a lethal anomaly that would cause it to die shortly after birth.

None of the state bans has taken effect. Some have already been blocked, and elsewhere courts are considering requests to put them on hold while legal challenges play out.

Supporters of the Alabama law have also said they anticipated the action but hope to eventually convince the U.S. Supreme Court to roll back abortion rights. Alabama Republican Rep. Terri Collins, who sponsored the ban, said the ruling "is merely the first of many steps on that legal journey."

"As we have stated before, the state's objective is to advance our case to the U.S. Supreme Court where we intend to submit evidence that supports our argument that Roe and Casey were wrongly decided and that the Constitution does not prohibit states from protecting unborn children from abortion," Alabama Attorney General Steve Marshall said in statement.

In a measured statement, Alabama Gov. Kay Ivey said the ban reflects Alabamians beliefs, but that she also supports the "rule of law."

"This legislation passed with overwhelming support in the Alabama Legislature and was signed into law as a testament to Alabamians' longstanding belief that every human life is sacred. We must continue doing all we can to protect life," Ivey said.