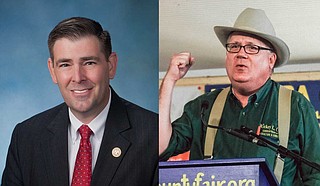 It's not that Gipson opposes local food, touting an online effort to connect producers and consumers. Cole, though, wants to exempt local food from the 7% state sales tax and use department employees use to market local food to stores.

Gipson, a lawyer then serving his third term in the state House of Representatives, was appointed to the statewide post last year by Gov. Phil Bryant. He succeeded Cindy Hyde-Smith, who became a U.S. Senator.

Cole ran unsuccessfully for agriculture commissioner in 2007 and is the former chairman of the state Democratic Party.