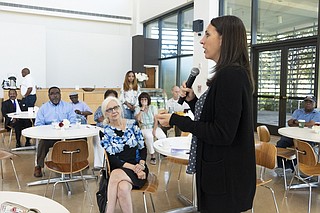 Lindsey Simmons, executive director of Mississippians Against Human Trafficking, delivers a presentation on trafficking during a community forum at the Mississippi Museum of Art in Jackson, Miss., on Aug. 30, 2019. Photo by Seyma Bayram

While poverty, under-education, drug addiction, and lack of family structure place children and young adults at risk for sex trafficking, "any kid who has a phone in their hand is a target," Lindsey Simmons told Jackson community members last week.

Young people in Mississippi are among the most vulnerable targets and least visible victims of trafficking, the executive director of Mississippians Against Human Trafficking said. She blamed false assumptions about the illicit industry, stigma toward LGBT youth, and the lack of robust state and local services to prevent trafficking. The majority of trafficking cases, 90% percent, begin on the internet, she said.

"We're failing these kids because we don't have services for them," she told the crowd at Jackson's Friday Forum at the Mississippi Museum of Art on Aug. 30, where she delivered her "Human Trafficking 101" presentation.

Founded in 2018, Mississippians Against Human Trafficking is a nonprofit umbrella organization that connects local and statewide law enforcement agencies, schools, health professionals, houses of worship and community members to combat sex trafficking in the state.

One driver of sex trafficking in Mississippi is its unique geographical positioning, with Interstates 55 and 20 cutting through the state and connecting it to Louisiana and the greater southeast region. This, combined with inadequate services to fight the trafficking and rehabilitate victims, have contributed to the state's status as a hub for the underground industry.

The legal definition of trafficking is the "exchange of sexual services for something of value," Simmons said. The sexual service could include sex, pornography, a photograph—any kind of sexual performance. Though the performance could be exchanged for cash, Simmons pointed out that drugs, a ride, food or even a place to sleep also count as items of value. This makes homeless youth especially vulnerable to trafficking, she said.

"If the child is under 18, all you have to prove is that something of value was exchanged for a sexual service," she said.

Stigma and social attitudes around gender not only contribute to sex trafficking among minors, but they are also a reason why incidents go underreported. We teach boys to not see themselves as victims, Simmons said, so they are less likely to report incidents of abuse. LGBT youth are also at greater risk for trafficking.

"We see a very high percentage of LGBT populations in trafficking victims, particularly here in the South, in the Bible Belt," she said. "You know, if someone discloses to their parents that they think they are gay, you still see parents kicking their children out. And now that child is on the street, and then vulnerable, so they are targets for traffickers."

To better serve young victims of trafficking, Simmons said we need to first and foremost eradicate the phrase "child prostitute" from our vocabulary. Until last January, before the Mississippi House of Representatives passed House Bill 571, police could charge minors with prostitution.

Gov. Phil Bryant applauded the bill in a letter to House Speaker Philip Gunn, R-Clinton, who had drafted it, writing that it was "exemplary and takes needed measures to strengthen Mississippi laws in order to better protect children who have been subjected to this heinous crime."

While Simmons also praised the new legislation, she calls for greater coordination between state and local agencies that provide overlapping services.

Children are also more at risk from a developmental perspective because their frontal lobes are still developing, Simmons said. This makes them prime targets for a trafficker's "grooming" and is more reason to become greater involved in a child's life at home and in school.