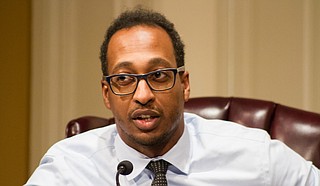 Ward 2 Councilman Melvin Priester Jr. said health care is a big cost driver for the City of Jackson, and officials are looking for ways to reduce those costs. File photo by Stephen Wilson

JACKSON — Rising health-care costs prompted the Jackson City Council to focus on ways it can help at its Aug. 22 budget meeting.

Ward 2 Councilman Melvin Priester Jr. told the Jackson Free Press that providing health insurance to staff members totals $16,174,451 for the current fiscal year. The city is expecting it to increase $1.67 million to $17,174,518 in the proposed budget for fiscal year 2019-2020.

That total includes the employee health clinic in Metrocenter, for which the proposed budget allocates which is $370,000, up from $340,000 in the current year's budget, Priester said.

The City offers its employees health insurance and benefits with low deductibles and low premiums, and the premiums offset the costs the City pays, he said. Premiums range from $37.85 biweekly for an individual to $124.62 biweekly for a family of three or more, the budget presentation states.

Employee and retiree premiums for the 2020 budget are projected to be $3,464,208 to help offset the City's costs, Priester said.

"We're trying to manage our bottom line, and by virtue of having our insurance policies like that, it's a very generous benefit to our employees. It's something we try to do because we haven't raised wage rates," he said.

One way that the City is reducing its costs is through the health-care clinic inside the Metrocenter. In 2016, Medical Analysis, a company that services on-site clinics for corporations and municipalities, presented a proposal to the city council for a clinic for City employees and their dependents.

"The idea behind the clinic is instead of having that person go to a random doctor off the street, they go to the clinic we control, and because we control it, we get charged less," he said.

Employees do not have a co-pay at the clinic, and the City does not get billed for the balance. However, they do get billed for any medical or lab tests that get run. The City has seen some savings in drug screenings and drug tests, he said.

"We were paying an outside entity to do our drug tests. Being able to do them in-house has been a big savings to us, (and) workers compensation has also probably saved us a lot of money," Priester said.

The clinic has had 170 workers' compensation visits, which averages $2,500 per claim if an employee sees a third-party doctor, thus saving the City money, he said.

However, the City wants to look for ways to drive more people to the clinic because it is not close to where most of its employees work, he said. At the budget hearing, Medical Analysis Vice President of Business Development Todd Garlington said the clinic has been working out of an executive office inside the mall and has one exam room.

Garlington told the finance committee that he was open to moving the clinic to a bigger space. "I know the City of Jackson has a lot of space that would need maybe some work in different buildings. We would love to have at least one more exam room," he said.

Priester said the City also reduces its costs through UnitedHealthcare, which manages Jackson's benefit process and gets cheaper rates with doctors, hospitals and pharmacies, so the administration is not paying full retail price for health-care procedures.

"We're trying to do what we can to reduce insurance costs by having things like this health-care clinic, but a big driver of our budget-making process is trying to make sure we have set aside enough money to cover health-care costs for City employees," he said.

CORRECTION: This story has been edited to reflect a correction. The City's health-care budget for the fiscal year 2019-2020 will have an annual, not monthly, budget of $370,000. The Jackson Free Press apologizes for this error.