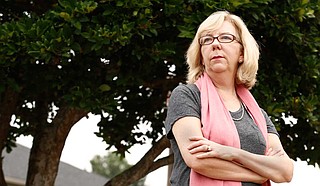 U.S. District Court Judge for the Southern District of Mississippi Carlton W. Reeves' decision comes after a four-week trial over the summer, in which the U.S. Department of Justice charged that Mississippi is violating the civil rights of residents with mental illnesses due to its lack of access to local treatment options.

"Watching some of the trial and then seeing some of the documents, and having a chance to look at the documents that went with the trial, I think it's pretty clear that our system has not allowed people with mental illness who want to live in their community to be able to have that opportunity," Joy Hogge, who advocates for children's mental-health care as the executive director of Families as Allies, told the Jackson Free Press after the ruling came down Wednesday morning. "It's not good for people to be forced to live in an institution and be separated from everybody else."

In his ruling, Reeves said he will appoint a special master to help map out a plan of action for the State of Mississippi to come into compliance. He ordered the State and the Justice Department to submit the names of three possible candidates for the position within 30 days.

Reeves' opinion opens by pointing to Melody Worsham, a witness who has struggled with severe mental illness, or SMI, but who also works as a mental-health professional for the Mental Health Association of South Mississippi. On the second page of his ruling, Reeves notes that Worsham said she believes the people who work in the State's Department of Mental Health "want to see this change," but that the State was not making a "major effort" to reform its system.

"It's like they stop right at that point to do the very thing that actually would make a difference. They stop," Worsham said at the trial in June. "So there is a lot of talk, there is a lot of planning, but there is also a lot of people being hurt in the process."

"The Court fully agrees with Ms. Worsham," he wrote. "On paper, Mississippi has a mental health system with an array of appropriate community-based services. In practice, however, the mental health system is hospital-centered and has major gaps in its community care. The result is a system that excludes adults with SMI from full integration into the communities in which they live and work, in violation of the Americans with Disabilities Act (ADA)."

During the trial, Worsham testified that she has voluntarily committed herself to hospitals in the State during a mental-health crisis six times—but has avoided state hospitals.

"I'm terrified of them," testified Worsham, who said she suffers from schizophrenia.

Peer-support specialists such as Worsham use their own experiences to help people who are dealing with similar struggles get better by sharing the skills and tools they have learned in their own lives. Many parts of the state have little or no access to the specialists, though, she testified on June 5.

Without access to community-based services like the ones she provides on the Gulf Coast, Worsham said, people will continue to undergo unnecessary hospitalizations.

"Not everything needs hospitalization. Not everything is an emergency. When I go to a hospital, I'm losing all power over myself," the told the court, as the Meridian Star reported. "And that itself is traumatizing."

Hogge praised the court's ruling for opening with Worsham's story.

"I think the thing I was most touched by is that the ruling itself starts with the words of someone who has a mental illness who has lived experience, and I hope—those words were so powerful and so gripping—that this whole process will be driven by the people who are receiving services, saying, 'This is what we actually need,' and that people will be free to say what they really think and that they won't be intimidated or retaliated against," Hogge said.

"And (I hope) that we can develop the kind of services that will be most responsive to them and their families."

In his ruling, Reeves found that Mississippi's mental-health system is so inadequate that the State is in violation of a 1999 U.S. Supreme Court ruling, Olmstead v. L.C., which found that people with mental illnesses must have the same protections and guarantees as people with any other ADA-protected disability.

In the Olmstead case, two mentally ill women, Lois Curtis and Elaine Wilson, argued that the State of Georgia had violated their rights. Doctors had diagnosed Curtis with schizophrenia and Wilson with a personality disorder. They had each spent years confined in the Georgia Regional Hospital in Atlanta in a psychiatric unit.

Once that case reached the nation's highest court, it ruled in their favor, finding that states must ensure the same kinds of protections for mentally ill people as for other disabled people under the Americans With Disabilities Act, ensuring that they have the most integrated and equal experiences in public spaces as possible.

To do that, public entities in the years since have sought to implement an "Olmstead Plan," which ada.gov defines as "a public entity's plan for implementing its obligation to provide individuals with disabilities opportunities to live, work, and be served in integrated settings."

In June, Hogge explained that Olmstead meant the State should be putting fewer people in hospitals and ensuring people have treatment options close to home.

"What (Olmstead) said is that mental-health services should be set up to help them do things, like ... how to work and manage their mental illness at the same time," Hogge said at the time. "And that also means if that's really happening, we shouldn't rely on state hospitals so much."

Melodie Peet, one of the U.S. government's expert witnesses who works as a director at the Institute of Professional Practices, though, said during the trial that the State's mental hospitals and regional community health-care providers, when working together, can offer valuable, balanced perspectives, she testified on June 17. Rather than operating as two separate systems, she said, state hospitals and community health centers should operate in synchronous harmony.

Instead, the State relies heavily on its own hospitals, which are stuck in the past, Peet said. "State hospitals were born and evolved even before there were departments of mental health," she said. "They had their own culture and ... operated independent of any entity for a long time."

Without oversight or accountability, state hospitals engaged in practices that further marginalized their patients, often over-medicating them based on the false belief that their conditions could only worsen, rather than improve. That was a self-fulfilling prophecy. Then came the community system, Peet told the court.

"The community system is a latecomer to that game, and it's very hard to develop the necessary connections and practices to forge that working relationship and really make real one system where it's not a junior and a senior relationship," Peet testified. "What I see (now) is two parallel systems each trying in their way to do the right thing but not having a structure that really enables and integrates the two systems in a way that ... is best for the patient."

Attorneys for the State defended its system in court, claiming the U.S. government had not proven that anyone was unnecessarily hospitalized or that they were denied access to community-based treatment options.

In court on June 27, Mississippi Department of Mental Health Executive Director Diana Mikula testified that she and other agency heads want to spend more money on community mental-health programs, but that the Legislature is not appropriating enough funds. State budget cuts in 2014, 2017 and 2018 made it more difficult for them to appropriate the funds needed to expand services, she said.

"We work with the Legislature. We ask for appropriations. We may not receive what we asked for," Mikula testified.

While the Legislature did give MDH $16 million to expand community-based services, it cut overall MDH funding by $28 million in the past two years.

MDH does "have a plan for the program we want to provide," Mikula said—just not the money. When federal attorneys pressed her, though, she admitted that MDH does not have a five-year plan for moving more services to community care.

That would include things like mobile crisis services, in which mental-health clinicians go into communities to meet patients where a crisis happens; supported employment and housing; peer-support services like Worsham helps provide; and other tools to help avoid hospitalization or jail.

On Wednesday, Hogge told the Jackson Free Press that she thinks Reeves' decision to appoint a special master is a good idea.

"It points to the need (for) systemic change—and who knows?—some significant restructuring of the system we have. But I think it also shows there was a lot of potential for local expertise and state input that could be valuable, so bringing those two things together," she said.

"I think it's shameful that we didn't have the State come together years ago and avoid all this cost and just develop the kind of system that we need. But given that that didn't happen, his approach ensures that there's that opportunity for the State itself to have significant input into the type of system that would really work."

Mississippi Attorney General Jim Hood, whose office defended the State in court, held a press conference in downtown Jackson at 1 p.m. Wednesday to address the ruling. There, he told Jackson Free Press reporter Seyma Bayram that he does not currently plan to file an appeal, but will watch how the process plays out.

“Just having scanned that 61-page opinion, there were some questions in there, but as a matter of fact I’ve been telling the Legislature in letters, we’ve got to fix this, we have a problem,” he said, adding that he “knew this was coming.”

“It was just a matter of… when a federal court ordered it, and then it’s going to be a matter of how much we’ve got to pay and how much we fix it,” he said.

He is the Democratic nominee for Mississippi governor.

Last week, Hood told the Jackson Free Press that he "had to defend" the State in court as attorney general.

He said Mississippi does not have enough trained psychiatrists and that, if elected, he would seek to improve mental-health-service access in the state by training more nurse practitioners for the role.

"Our state, we don't have the resources, so we're going to have to depend heavily on nurse practitioners that specialize in the area of (psychiatry) to get them out and encourage them to work in other areas that our doctors hadn't gone (to)," he said.

Mississippians vote for a new governor and other statewide offices on Nov. 6, when Hood faces the Republican nominee for governor, current Mississippi Lt. Gov. Tate Reeves.