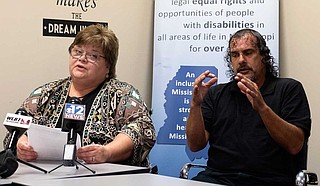 JACKSON—Mississippi's top disability-rights advocacy group praised a federal judge's ruling earlier this week that found the State violates the civil rights of those with mental illness. One leading mental health advocate, though, pushed back on Attorney General Jim Hood's emphasis on money, rather than a well-funded systemic overhaul, as the primary way to repair the system.

"We have awaited Judge Reeves' decision, and we're very pleased that he understands that our State (government) needs guidance, and our State needs oversight in fixing Mississippi's mental-health system," Disability Rights Mississippi Executive Director Polly Tribble said at a press conference in Jackson. "Clearly, Judge Reeves understands that our state is hospital-centered and that we have major gaps in community care for people with mental-health needs."

U.S. District Court Judge for the Southern District of Mississippi Carlton W. Reeves ruled Wednesday that the State must make sweeping changes to its mental-health system so that people with severe mental illness have access to treatment in their own communities rather than going through unnecessary institutionalization in State-run hospitals. The ruling followed a month-long trial over the summer, after the U.S. Department of Justice brought a lawsuit charging that Mississippi violates the civil rights of those with disabilities.

In his ruling, which found that the State is not in compliance with the Americans With Disabilities Act or a key 1999 U.S. Supreme Court ruling, Reeves ordered the appointment of a special master to oversee the process for deciding how the State will move forward to make necessary changes to its mental-health system.

"Thousands of Mississippians cycle through State institutions annually because they don't get what they need at home and in their community. And this is not a political vow. Individuals who depend on our State's mental health system should not be pawns in the political arena, or in current or future power struggles. There's no place for that," Tribble said Thursday. "The money is already there. It is up to our State to figure out how to spend it wisely by funding community services."

Hogge: Main Problem is Lack of Coordination, Not Money

Hood, the Democratic nominee for Mississippi governor in this fall's election, defended the State in federal court as part of his position. But in a press conference after the ruling Wednesday, Hood said he had warned State leaders—like Gov. Phil Bryant and Lt. Gov. Tate Reeves, both Republicans—for years that the State could face an expensive lawsuit if it did not do more to shore up its mental-health system.

Hood provided members of the press with more than 40 pages of letters, dating from 2013 to 2019, in which he urged Lt. Gov. Reeves, Bryant and leaders in the Mississippi Legislature to appropriate more money to mental-health services. Instead, the State cut funding for mental health, even as the Legislature implemented the largest tax cut in history, including $260 million that benefited out-of-state corporations. 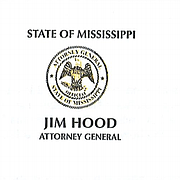 "Had we been smart and taken that billion dollars a year from the federal government, we could have avoided this lawsuit and settled it," Hood said Wednesday.

At Thursday's press conference, though, a leading advocate for children's mental health told the Jackson Free Press that money is not the main problem the lawsuit seeks to address. It is "much more about how the Department of Mental Health and the whole mental-health system is structured," Families as Allies Executive Director Joy Hogge said.

"There is no overarching infrastructure in our state to coordinate the different parts of the mental-health system like the Department of Mental Health, the Division of Medicaid, the community mental-health system and all those private providers that are out there," she said. "So that is the main reason people are falling through the gaps. ... We don't even know if it's about money at this point. Because until those things get addressed, there is no way to know what money is actually being spent on and what we need (when it comes to) money.

"So all those discussions about money are really red herrings at this point and not the most important thing to be talking about. We need to look at how our system is structured, and every lawmaker bears responsibility for that."

Hogge supports one of Hood's suggestions, though. As part of his campaign, Hood has pointed to a shortage of trained psychiatrists in Mississippi, and said he would like to train more nurse practitioners who specialize in psychiatry.

"On the question of nurse practitioners, I agree with Attorney General Hood that that would be a good idea because it would expand the workforce, and that's been a way that the lack of mental-health providers has been addressed in other states," Hogge told the Jackson Free Press.

Tribble, who made it clear that she did not want to engage the politics but only the policy, agreed.

"Any push for more specialized professionals can only help our system," Tribble said. "So again, I don't think there's room here for a political platform, but ... I think it's important to add to professionals. We need more people in our state that are trained and certified in psychiatry and nursing, too."

Tribble on Medicaid Expansion: 'It's Just Got to Happen'

Tribble also told the Jackson Free Press that while she did not know exactly how much Medicaid expansion would help the issues addressed at the trial, she thinks "Medicaid expansion is essential to people with disabilities and the people we work with." 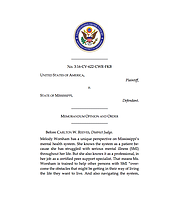 Medicaid expansion would bring health-care access to about 300,000 Mississippians who earn too much for traditional Medicaid but not enough to afford private insurance. The federal government has appropriated more than $1 billion every year since 2013 to help the state expand, but State leaders like Bryant and Lt. Gov. Reeves have rejected it each year.

"It's just got to happen," Tribble said.

Since Hood launched his campaign last year, he has made expanding Medicaid, which Lt. Gov. Reeves opposes, a core part of his campaign, saying it will help save rural-hospital emergency rooms in Mississippi, about half of which are under financial duress and in danger of closing. On Wednesday, he said it would provide a big boost to the State's mental-health system, too.

At Thursday's press conference, though, Hogge was more circumspect.

"The way Attorney General Hood talked about, yes, Medicaid expansion itself is something we need to look at to help a lot of people, but it's not necessarily very relevant to the specific issues in this lawsuit," she said.

Moving forward, Hogge said, the State must look to people who have first-hand knowledge of the struggles people experience in the mental-health system. She pointed to Judge Reeves' ruling, which opens by recounting the testimony of Melody Worsham, a witness who has struggled with severe mental illness, or SMI, but who also works as a mental-health professional for the Mental Health Association of South Mississippi. On the second page of his ruling, Judge Reeves notes that Worsham said she believes the people who work in the Mississippi Department of Mental Health "want to see this change," but that the State was not making a "major effort" to reform its system.

"It's like they stop right at that point to do the very thing that actually would make a difference. They stop," Worsham said at the trial in June. "So there is a lot of talk, there is a lot of planning, but there is also a lot of people being hurt in the process."

Hogge said Thursday that it is "critical" that "the people receiving services or who need services are the ones guiding this effort" to reform the system in the wake of Judge Reeves' ruling.

"I think one of the most profound parts of Judge Reeves' important and significant ruling was it starts with him sharing the words of a person who manages a serious mental illness and helps others with theirs on a day-to-day basis, that that is where he found his clarity in the midst of all this confusion about mental health, and that's what we need to do, and that's who needs to be leading this effort," she said.

Judge Reeves gave the State and the U.S. Department of Justice 30 days to submit the names of three potential candidates to serve as a special master.