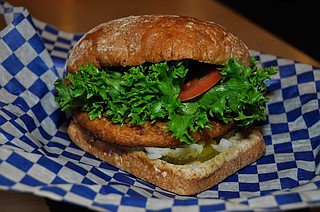 Free-market advocates filed a federal lawsuit against Mississippi on July 1—the same day the state enacted a law saying "a plant-based or insect-based food product shall not be labeled as meat or a meat food product." File Photo by Trip Burns

JACKSON, Miss. (AP) — Mississippi is considering new rules that let companies continue to use food-labeling terms such as "veggie burger" and "vegan bacon," as long as the terms are prominently displayed so consumers understand the products are not meat.

The state agriculture department on Thursday proposed new regulations for plant-based products that are sold as alternatives to meat.

The regulations came in response to a lawsuit filed by a nonprofit organization advocating plant-based foods and an Illinois food company. The lawsuit was filed on July 1, the same day the state enacted a law saying that "a plant-based or insect-based food product shall not be labeled as meat or a meat food product."

Meat producers have been trying to protect meat terminology by pushing for state laws that restrict labeling of products such as meatless meatballs.

Makers of plant-based foods have also sued Missouri and Arkansas over labeling laws.

The proposed Mississippi regulations say terms such as "plant-based" must be clearly displayed on packaging of products such as vegetarian hot dogs. The rules will be open for public comment for nearly a month. Mississippi Agriculture Commissioner Andy Gipson told The Associated Press on Friday that if there are no changes needed after the comment period, he will issue an order for the regulations to take effect.

"They're commonsense rules," Gipson said. "We're doing exactly what we intended to do."

Gipson said the regulations do not weaken the food labeling law, and he said terms like "veggie burger" were never going to be illegal. He said while many products are already clearly labeled, the law is aimed at those that are designed to deceive consumers.

"That whole lawsuit has been a waste of time," Gipson said. Speaking of groups that filed it, Gipson said: "They're just trying to raise money."

The lawsuit was filed by Plant Based Foods Association and Illinois-based Upton's Naturals Co., which makes vegan products and sells them in many states. Both are represented in the suit by the Mississippi Justice Institute and the Virginia-based Institute for Justice.

The lawsuit is still active, but the two groups issued statements Friday saying the proposed regulations are a victory for the First Amendment.

"It shouldn't be a crime for plant-based food companies to describe their products in a way that everyone understands," Mississippi Justice Institute director Arron Rice said.

Institute of Justice attorney Justin Pearson said: "Our lawsuit made it clear that subjecting plant-based food companies to possible criminal prosecution for using common terms on their labels would be a violation of their free speech rights."

The Mississippi law also says "cultured animal tissue" made in a lab from animal cells may not be labeled as meat or a meat product.