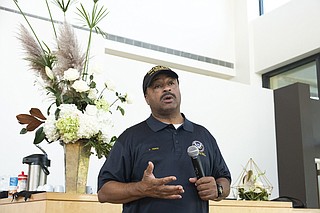 Lee Vance, candidate for Hinds County Sheriff, discusses his platform before community members at the Mississippi Museum of Art in Jackson, Miss. on Sept. 6, 2019. Reforming the pretrial detention system in Hinds County is one of Vance's top goals. Photo by Seyma Bayram

Former Jackson Police Chief Lee Vance said Friday that reforming the pretrial detention system in Hinds County would be a top priority for his administration if he is elected Hinds County sheriff in November.

"Our system is like a swamp, but it must flow, and that will solve a lot of problems," the Democratic nominee for sheriff told attendees of a community forum last Friday, referring to the Hinds County Detention Center in Raymond, where long case-processing times have led to people waiting, on average, one year and seven months for their day in court. One man is currently awaiting trial for six years, outcoming Sheriff Victor Mason said recently.

The Hinds County Detention Center has a long history of violence, mismanagement and lawsuits. The jail is currently under a federal consent decree following a 2011 lawsuit.

A 2015 BOTEC Analysis Corp. report on crime and the judicial and jail systems in Jackson, which the Mississippi Legislature funded and Attorney General Jim Hood contracted out, found that it took around 585 days for felony cases to move to disposition within the Hinds County Circuit Court.

The delays, which feed into violence and disruption in the jail, have long been a result of systemic problems involving the district attorney's office, judges and law enforcement.

BOTEC found that more than 72% of the people inside the Hinds County Detention Center had been there for more than one year, with 42% serving more than two years before appearing in front of a judge. Nearly a quarter of the jail's population had been there for three or more years. The national standard for case-processing times, based on a sliding scale, recommends that 75% of felony cases be resolved within 90 days.

Mississippi has adopted its own, longer standard for disposition time, however, at 270 days for felony cases and only 9% of felony cases are disposed in 90 days. Still, the BOTEC report found that Hinds County was "nowhere near the target," with roughly one out of five disposed cases adhering to the state's standard.

During his talk at Friday Forum at the Mississippi Museum of Art, Vance criticized "criminal-justice reform," likening it to a catchphrase that is not concerned enough with problems like pretrial detention, which is behind 95 percent of America's jail population increase over the last 20 years.

Criminal-justice reform, in fact, focuses heavily on overhauling systems of long-term pretrial detention, as well as keeping people in jail because they cannot pay fees. This is part of the campaign platform for incoming Hinds County District Attorney Jody Owens, a self-avowed criminal-justice reformer who does not have a challenger in November. Owens vows to work with the sheriff's department, judges, and others to repair the process and reduce pretrial time spent in jails.

Like Owens, Vance called for an overhaul of the pretrial detention system, saying "the whole thing needs to be looked at and scrutinized." The system disproportionately victimizes poor people and minorities, who are unable to make bail, he added.

"I think the most valuable program that I can start up is bringing more awareness to the right to a speedy trial for an American citizen. In criminal-justice reform, I'm not hearing enough about that. It's a violation to me of your right as an American citizen to be sitting in a detention center for three or four years and not go to trial. If you want to help people, to me, that's where I start... We have got to get these people out of that detention center in a timely manner," he added.

In addition to unnecessary, prolonged detention, pretrial incarceration has other consequences. The Bail Project found that 90% of people who are held pretrial on bail end up pleading guilty, versus 2% for those bailed out.

Vance vowed to work together with the courts to ensure faster case-processing times so that innocent people are released quickly and those who are found guilty are transferred to the Mississippi Department of Corrections.

"Some of these folks don't need to be locked up at all. If you've got some judge (who) gave a guy 30 years (for having) 3 or 4 pounds of marijuana, that's crazy. ... Obviously, people who have (committed) violent crimes, you've got to take a whole different look at them," he said, reflecting the position of the incoming district attorney.

Prioritizing violent crimes rather than arresting people for low-level offenses is one of Vance's stated goals. Doing so would not only reduce the jail population, he said, but it would also help cultivate trust between law enforcement and the community.

"Trust is a very difficult thing to gain, and it's even more difficult to keep. But once you have it, you've got something that's more valuable than gold. And that's what I want to see. That's my long-term vision," he said.