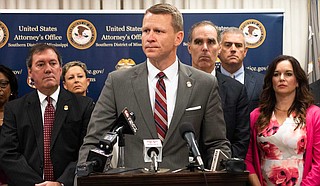 To address rising human-trafficking rates in Mississippi, a collaboration of government agencies has launched the inaugural Mississippi Human Trafficking Council.

U.S. Attorney Michael Hurst, Southern District, told members of the press today that the council will function as a statewide, centralized task force bringing together federal, state, local, and tribal law enforcement alongside nonprofits and non-governmental organizations. “When we uncover, in this office, these types of crimes, we are going to do everything in our power to prosecute these evil-doers to the fullest extent under the law, period,” Hurst said, after revealing that human trafficking cases in Mississippi had more than doubled between 2017 and 2018.

Children are some of the most vulnerable prey for traffickers. “Six years ago, as an assistant U.S. attorney, I was profoundly affected when this office prosecuted two out-of-state gentlemen who had come to our state solely for the purpose of engaging in sex with a child under the age of 10 years old,” Hurst told the press. He added that a man was recently prosecuted in Jackson for trafficking a 15-year-old girl and that his office had rescued a young woman who had been trafficked from Tennessee to Mississippi.

The council will include a variety of subcommittees charged with strategic planning, policy and legislation, training and more. In addition to statewide collaboration among governmental organizations, the council will also rely heavily on partnerships with community organizations to detect signs of trafficking and support victims.

“What’s unique about this operation are our non-government partners and faith-based organizations,” Lamar said. “We learned, through our mistakes over the years, that we can’t do this alone. You can’t prosecute your way out of this problem. We have to have the aftercare, the support, the training, the community awareness.”

The council will follow recommendations set forth in a 2015 report from Gov. Phil Bryant’s Human Trafficking Task Force.