A Little Time to Grow 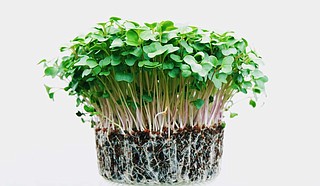 A Little Time to Grow sells microgreens as its primary cash crop. Photo by Deviyahya on Unsplash

Throughout each month, Gabriel Dinosaur, formerly known as Gabriel Porter, helps organize True Local Market, a mobile farmers market that sets up at Cultivation Food Hall on Saturdays and at other locations as needed. He is often either standing beside his table with a "Free Hugs" sign or selling microgreens, herbs and other produce for his family business, A Little Time to Grow. Occasionally, his wife, Sheryl "Boo" Dinosaur will help Gabriel at the event.

Him, Sheryl, who also goes by "Glowie," and their five kids live on a small farm in Brandon.

"The kids wanted our last name changed to Dinosaur," Dinosaur says of the family's recent name change. "We discussed it and decided to make it legal."

The family, which consists of Dinosaur, wife Sheryl, and five children own a produce business and work the farm as a family business.

"We plant love in the soil," he says.

About 12 years ago Dinosaur became interested in where food comes from and how a person grows it. Eventually his wife joined him in that interest. At first the couple sought to grown their own food to save money, but then he and Sheryl discovered permaculture, an Australian agricultural practice that focuses on regenerative grown products such as perennials and plants with higher yield and less labor, or a garden that will replenish itself.

Dinosaur was inspired by Bill Mollison, an Australian researcher and biologist, who developed the theory and practice.

"Mollison made me think, 'How does nature replenish the forest without fertilizers and poisons, which are sold today in America, and also without oil-filled tractors and combines?'" Dinosaur says. "Our biological diversity is our biological security. Why do we mow down forests and replace with only pine trees?"

These thoughts pushed him to establish a business that is "respectful to nature, not invasive," he says.

The couple's true aim, Dinosaur says, is to maintain a sustainable and wholistic lifestyle that improves their quality of life, one with organic and fresh vegetables. They officially started the business, A Little Time to Grow, in 2016. The farm's cash crop is microgreens, or young vegetable greens that are about 1 to 3 inches tall, as well plants that have a quick harvest time—usually about 10 to 14 days.

"I began by building green houses and researching the permaculture process," Dinosaur says. He was concerned for "the lack of respect" humans have for nature, he says, and he decided that permaculture is "realizing where we fit into the full circle."

Another reason why permaculture is important to the Dinosaur family?

"It is about working together, family and neighbors," he says.

He began True Local Market in 2018. He has helped small farms, like Cedar Tree Farms, the owners of which did not know where to begin, figure out when to start their crops, he says, helping them figure out how to plan what to plant and when. He helps the other vendors within TLM with other business-related matters, such as where to set up for marketing, how to handle the business-end of selling their produce and even how to use credit-card machines.

For TLM, Dinosaur makes the schedules, scopes out additional markets and verifies the produce and crafts offered are all Mississippi made.

TLM will be at the ribbon-cutting for the new Rainbow Natural Grocery Cooperative located at Northpark Mall in Ridgeland on Sept. 18 at 8 a.m., and the market will appear at Sept. 20 during Parking Day in downtown Jackson on Congress Street, with 10 to 15 vendors from TLM selling their produce and wares. The demand for True Local Market produce continues as more small farms join.

"I never anticipate seeing the end of gardening and planting in the permaculture practice," Dinosaur says.

"The theory continues to change, always adding something new, with more to learn."

"Then we can barter and share, trade and work together," he says. "... I want to invest in a social capital rather than a monetary one."

That is the reason Dinosaur and his family encourage and help Mississippi-grown produce farms.

"I want to collaborate and work with each other to respect nature and learn from her," Dinosaur says.