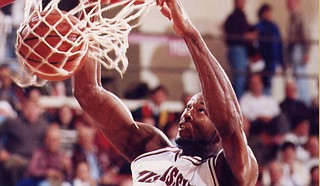 The sports world still has not restarted as we—a state and nation—deal with the effects of COVID-19. Now as we have reached April, college basketball fans would normally be getting ready for the Final Four and the crowning of a champion.

Since there was no NCAA Division I Men’s Basketball Tournament this year, it seems like a good time to look at a dream season from the past. The 1995-1996 Mississippi State men’s basketball team took the whole state on a wild ride through the NCAA Tournament.

Dampier was a force in the middle of the Bulldogs’ defense as he helped protect the rim with his 3.1 blocks per game. His defense helped MSU win the SEC West title and upset the University of Kentucky in the SEC Tournament.

In the round of 32, MSU faced Princeton University in a game that wasn’t much of a battle for the Bulldogs. Dampier dropped 20 points, seven rebounds and three blocks in a 63-41 win for MSU.

The win put MSU into the Sweet Sixteen where the University of Connecticut and star guard Ray Allen awaited the Bulldogs. In one of the biggest upsets of that tournament, MSU defeated UConn 60-55 as Dampier scored 15 points, nabbed eight rebounds, blocked four shots and made two assists.

MSU next faced the University of Cincinnati in the Elite Eight for a spot in the Final Four. Dampier scored just nine points, six rebounds and two assists in the Bulldogs 73-63 victory over the Bearcats.

The Bulldogs win over Cincinnati earned the team a trip to the Final Four for the first time in school history. MSU was just two wins from winning a national championship but Syracuse University stood in the Bulldogs way.

Dampier scored 12 points, grabbed 14 rebounds, six assists, one block and one steal in the Final Four against Syracuse. It wasn’t enough to push MSU to a victory as the Orange held on for a 77-69 win.

After averaging 14.5 points, 9.3 rebounds, 3.1 blocks and 2.3 assists per game, Dampier decided to forgo his senior season and enter the NBA Draft. The strong NCAA run by the Bulldogs and Dampier’s play helped him in the draft.

The Indiana Pacers selected Dampier in the first round with the 10th overall pick in the 1996 NBA Draft. He would play one season in Indiana before being shipped to Golden State.

Dampier spent seven seasons with the Warriors. He would make Dallas his next stop as he played for the Mavericks for six seasons. He would spend one season with the Miami Heat before ending his career with the Atlanta Hawks.

In his 16-year NBA career, Dampier played in 987 games as he averaged 7.4 points and 7.1 rebounds per game. He never won a championship at the NBA level.

Nevertheless, Dampier and the rest of the 1995-1996 Bulldogs will live on in Mississippi sports history for a magic March run that captivated the state.