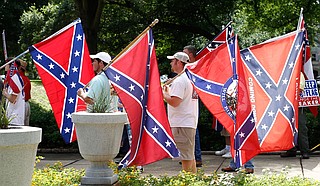 Supporters of the Confederacy celebrate every April as Confederate Heritage Month, usually with a proclamation signed by the Mississippi governor. File photo by Imani Khayyam

Again, Mississippi is not displaying the best image for the world. My home state is desperately and woefully unprepared for the COVID-19 crisis. As many Mississippians are faced with the coronavirus in every county but two as of today, the Mississippi Sons of Confederate Veterans released a proclamation signed by Gov. Tates naming April as "Confederate Heritage Month.”

Every year, Mississippi declares the month of October as Racial Reconciliation Month in an attempt to carry the gospel of racial healing. Still, it sends a different message during the entire year. If Mississippi leadership is only willing to express empty declarations of reconciliation without making real change, what's the point? Reconciliation denotes action. The flag is offensive to African Americans. There is no debate on that. The Confederate emblem must go.

Many don't seem to realize the effect that displaying the Confederate Flag is having on Mississippi's economy. Businesses pulled out of Mississippi in 2016, stating that until the state resolves its ongoing civil-rights issues, they will base their operations elsewhere. We are talking about jobs that affect people in Mississippi. Mississippi can't afford to take a loss of this magnitude. Our state needs jobs. How many new businesses and jobs have been created in your community?

On April 3, the governor signed a proclamation declaring “Confederate Heritage Month” two days after he finally issued a statewide shelter-at-home order due to the increased numbers of COVID-19 cases in Mississippi. As of April 6, 2020, the state had seen 1,915 cases and 59 deaths in the State of Mississippi. Yesterday, the Mississippi State Department of Health confirmed that a disproportionate number of those infected with and dying from coronavirus in Mississippi are black 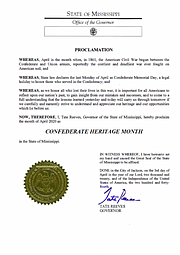 Now, during Confederate Heritage Month, Mississippians are losing their lives due to the coronavirus. Even faced with the threat of a worldwide pandemic that threatens our mortality, we are as divided as ever. We are unable to agree on simple facts, and we remain torn on issues of morality. Even as an unseen enemy extinguishes all around us, the State is officially honoring the Confederate cause and flag. Many African Americans in Mississippi were lynched and murdered under that flag.

Gov. Tate Reeves should be working every moment to ensure Mississippi has the supplies and funding to provide testing and treatment for those that are ill from COVID-19. He should be doing whatever he possibly can to ease the stresses of life for Mississippians.

It is no secret that black communities in Mississippi are not equipped for the outbreak of coronavirus as their rural hospitals are not prepared for such medical support to those this virus affects, in no small part because Gov. Reeves is adamantly opposed to expanding Medicaid. I knew before the State affirmed it yesterday that coronavirus would disportionately affect black Mississippians.

The blame for this, as well as other issues, rests squarely on the shoulders of our political leaders and you, the community. It is time for Mississippians to use their voices and influence to demand change within the state of Mississippi by voting on the side of progress and change. It is time for pastors—white and black—to step up by using one of Mississippi's most powerful platforms on Sunday to speak out against the issues of the Confederate emblem, racism, pay gaps, poverty, human rights, education and the many other problems that affect the people of Mississippi.

If Mississippians take a stand to support the change of the flag, and against the horrific tradition of Confederate Heritage Month, it will signal to the rest of the country that Mississippi is open for business. The next generation of Mississippians depends on the current leadership to create this change. Enough is enough. Mississippi must stand and unify together to create a campaign that will bring down the confederate flag in Mississippi. Mississippi will show the world we refuse to hold on to the state's dark past, and we will usher in a new day filled with healing.

I challenge the governor to make good on the promise of reconciliation by rescinding the proclamation of “Confederate Heritage Month” and declare a statewide call for unity and true reconciliation in honor of those families who have lost loved ones to COVID-19, and those families currently struggling with the virus.

Now is the time for the governor to unify the state, begin strategic planning for rural communities that the virus impacts, pass Medicare for all, ensure the State has the resources and tools in place for individuals to receive their unemployment benefits in time, use the Rainy Day Fund and federal dollars to enhance distance learning for K-12, and ensure the faith-based community has funding and resources for the least among us.

This will send a message to the world that Mississippi will no longer support symbols of hate and are taking actions to change its dark past. Now is the time, more than ever, for Mississippians black and white to unite in healing for our dear state as this deadly virus called corona has no color, religious belief or economic background.

Duvalier Malone is the author of "Those Who Give A Damn: A Manual for Making a Difference," a motivational speaker, a community activist who has organized numerous of rallies to attempt to bring down the confederate flag in Mississippi, and CEO of Duvalier Malone Enterprises, a global consulting firm. He lives in Washington, D.C.

Submit opinions of 600 to 1,000 words, including factcheck information and links, to [email protected].