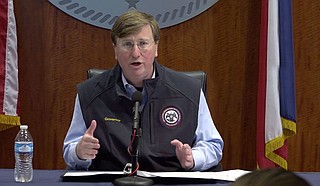 Gov. Tate Reeves is using COVID-19 to play politics with Mississippians’ lives, only invoking the Constitution when it serves the political interests of his voter base. Photo courtesy State of Mississippi.

As I typed this editor's note Tuesday morning, April 14, public-school administrators, parents, teachers and students had no idea whether they were going back to school next week. Gov. Tate Reeves hadn’t yet shared his decision, even as most of us knew it was impossible to re-open schools this semester as the state’s COVID-19 cases and death toll still climb.

Nevertheless, school staff prepared to re-open schools, using wasted taxpayer resources, while trying to navigate new realities, and care for their own children and livelihoods while they waited.

It’s not that far off from Reeves taking way too long to declare a statewide shelter-in-place order to keep COVID-19 from spreading in Mississippi. It’s a strange timeline. Before he went to Spain for spring break with his family—where and when COVID-19 was already a serious issue—he actually set up a COVID-19 task force.

Then, he left the country.

Reeves returned the Friday of spring break with coronavirus reality hitting us all fully in the face. That, by the way, was the first official day our staff members started working remotely to help flatten the curve and stay safe.

Maybe Reeves was jet-lagged, because he didn’t immediately grab a microphone to tell all Mississippians to stay home to stop the spread. Over the next week, we kept hearing from people shocked by close gatherings on beaches, in flea markets, in restaurants, at auto auctions, in churches—right at the pivotal time when stronger, smarter leadership could have helped contain the spread and, frankly, keep some Mississippians alive who have died since then.

Finally, under a lot of pressure from citizens of all political stripes, mayors across the state and this newspaper, Reeves issued a weak executive order on March 24. It mostly provided an expansive list of “essential” businesses and operations exempt from social-distancing and closing rules, including car sales, gun shops, churches, department stores, shopping centers and even “offices.” (The latter three weren’t on the “essential” list, but he still managed to exempt them, which caused major confusion and worker fear in upcoming days.)

The order also was a clear override of any attempts by local governments to limit his laundry list of essentials. His staff and friends in media then tried to deny that he had done a lot of what he said in black-and-white in the order, even personally attacking me and reporter Nick Judin for reporting what he wrote.

It was a hot mess.

It took until Wednesday, April 1, for Reeves to bow to pressure and issue a shelter-in-place order—24 hours after he had taken great pains to explain why issuing one in just one county (Lauderdale) made a lick of sense. By then, of course, many people had come into contact with those infected with the virus, and the rest is tragic history.

Reeves showed that he can, however, make haste with anything connected to conservative political wedge issues.

Just two days after he belatedly issued the shelter-at-home with excuses about it just then being needed, Reeves quietly signed a Confederate Heritage Month proclamation on April 3. Now, this embrace of the “heritage” of a treasonous war to maintain and extend slavery is horrific any year, and makes Mississippi look back-assward, but doing it this year was mortifying.

For one thing, we knew by then that many of the early deaths were African American. Nick and I had started asking for race demographics of the COVID-19 cases and deaths well before—him at press briefings and me daily in social media, tagging the Mississippi State Department of Health and Reeves. Importantly, Reeves and State Health Officer Thomas Dobbs knew when the governor signed that Confederate glorification document that black Mississippians were disproportionately contracting and dying from the coronavirus.

Still, as the Jackson Free Press discovered two days later on the Sons of Confederate Veterans Facebook page, Reeves signed that proclamation and gave it to SCV, much as former Gov. Phil Bryant used to do, and a long line of governors before. But here’s the thing: I really don’t think even Bryant would show the kinds of callous leadership Reeves is displaying. Last year, for instance, in 2019, Bryant signed a Unity Month proclamation instead of again honoring the Confederacy, urged by a Christian racial-reconciliation group out in Flowood, Reeves’ hometown.

On top of that, Reeves has given special dispensation to gun stores, saying he was honoring the Second Amendment (which doesn’t mention regulation of sales during a public-health crisis) and going after mayors who tried to enforce social distancing in churches, saying the Constitution doesn’t allow government to close them during a pandemic. (Churches are a major hotspot for coronavirus outbreaks in the U.S. and elsewhere.)

But Reeves’ devotion to constitutional rights did not extend to women. He banned abortion on Friday, April 10, saying they are an “elective” surgery and the protective gear is needed for COVID-19 cases. Problem there is that Reeves told the hard-right American Family Association president Tim Wildmon just the day before on his radio show that he was using the same strategy the Texas governor devised to stop abortions during the COVID-19 crisis—basically to pretend it was to preserve PPEs.

To recap: Reeves’ leadership logic says it’s OK to endanger people’s lives to keep churches and gun stores open using a constitutional excuse, but then ignore constitutional precedent on a procedure Mississippi women have the legal right to choose, as well as access to it.

Bottom line: A real leader would put politics and his 2023 re-election campaign aside right now to save lives. Reeves must stop delaying needed safety precautions in an extraordinary time while using the pandemic as political red meat for his (and Donald Trump’s) voter base. Plus, he should be fiscally responsible with tax money instead of ensuring that the State will spend even more in legal fees over frivolous abortion lawsuits, especially since he foolishly went on the radio to make it clear that he was about to violate the constitutional rights of Mississippi women.

Reeves should also rescind and apologize for “Confederate Heritage Month.” Oh, and stop blaming a non-existent statute for making him sign a celebration of a war for slavery while today's black Mississippians can’t even have funerals to properly bury their dead.

This lack of leadership and treatment of Mississippians is beyond partisanship, and more than amateurish. It’s repulsive.