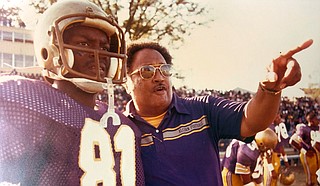 A historically black college and university football coaching legend has passed away. On Saturday, April 25, Marino "The Godfather" Casem died at the age of 85 in his home. Photo courtesy Alcorn State Athletics

A historically black college and university football coaching legend has passed away. On Saturday, April 25, Marino "The Godfather" Casem died at the age of 85 in his home.

Casem’s coaching career as "The Godfather of the SWAC" began at Alabama State University. He spent just the 1963 season with the Hornets going 2-8.

The Memphis, Tenn., native was hired by Alcorn State University, which ended up being a perfect fit for both coach and university.

Over the next 22 years, Casem built a program and legacy that few can match, winning seven SWAC Championships and four Black College National Championships.

In 22 seasons with the Braves, Casem enjoyed a winning season 17 years. He finished his time with Alcorn State with a 139-70 record. In addition to his tenure as head football coach, he also served as athletic director.

As athletic director at Alcorn State, Casem won the first Athletic Director of the Year award given by the SWAC. He was successful on the field or directing sports off the field as Alcorn State enjoyed athletic success.

In 1986, Casem resigned at Alcorn State to become the athletic director at Southern University. He would be the head football coach for the Jaguars in 1987, 1988 and 1992. He finished his coaching career with a 159-93-8 during his time at Alcorn State and Southern.

Casem has been inducted into several halls of fame and collected a number of honors over the years. He is a member of the Alcorn State Hall of Fame, Mississippi Sports Hall of Fame, SWAC Hall of Fame and the College Football Hall of Fame.

Few coaches can lay claim to leaving a lasting impact on two different universities like Casem. He made Alcorn State and Southern better athletically and made both schools winners on and off the field.

When ESPN named its 150 greatest college football coaches, Casem was named number 122. The only SWAC coaches to finish ahead of him were Eddie Robinson, Arent Mumford, John Merrit and Billy Nicks.