Break Out Your Earbuds: Jackson-based Podcasts 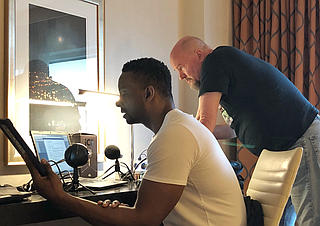 If you are searching for something new to listen to during your lunch break or on long drives, look no further than this list of podcasts featuring Jackson metro residents discussing a variety of topics, from life experiences to geek culture. Whether you enjoy keeping up with new episodes or listening to extensive archives, these podcast have you covered.

Key to the City

Billed as a society and culture podcast, "Key to the City" endeavors to promote creatives involved in music, film, art, entrepreneurship and community leadership by allowing them to discuss their successes, failures and "the struggles in-between."

JXN Transplants markets itself as a welcoming committee for those who have only recently become Jacksonians. Each week, Ashlee, the podcast's host, interviews a Jackson native or transplant and allows them to tell their own Jackson-centered story before asking them for advice on a variety of topics.

Reality Breached is the local Jackson spotlight, seeking to dismantle the city's "bad rap" by relating stories about positive people and places in the Jackson community. The podcast releases new episodes timed to coincide with notable occurrences in the metro area, with the most recent edition discussing the removal of the state flag.

Self-proclaimed millennial Theca Jones hosts the lifestyle podcast and makes it his mission to interview guests "from different walks of life." Each podcast is released with a video component featuring an animation of the Roguish Gent himself. The most recent episode features Mayor Chokwe Lumumba of Jackson.

"Token Talk" is a multicultural podcast spanning six seasons, hosted by three Black men hailing from Jackson, Miss. The group aspires to "bridge the gap of cultural understanding" in the metro area by featuring diverse guests in its weekly offerings. The podcast was recently highlighted by the Mississippi Museum of Art.

A music producer, an artist, and a veteran collaborated to create The Black Pocket Podcast. The group of men seeks to provide "pure entertainment" to the Jackson community, sharing daily memes on its Facebook page to supplement its monthly podcast releases. The group is an offshoot of Reality Breached's family of podcasts.

Releasing new shows monthly, "Techpedition" is a revival of a previous show by the same name, both hosted by Clarence Brown, a co-founder of the Discussing Network of podcasts who has voiced a whopping 154 episodes. The podcast covers advancements in technology and how they relate to popular media—with Brown and others putting their own "Southern flavor" on the news of the day, such as the arrival of "Avatar: The Last Airbender" on Netflix and the iPhone SE2.

"Dicejunkies" covers topics such as gaming, comics, movies, news and "other geek culture topics." The podcast started in 2016 and has since expanded to include a series of YouTube videos focused on gaming tips and commentary. The show's hosts are also active in cosplay, sharing photos and videos of conventions they attend.

Part of the Discussing Network, the podcast covers all CBS All-Access series affiliated with the "Star Trek" franchise, reviewing each episode in detail. The show has released 99 episodes thus far, with the 100th set to become available for listening soon.

Discussing Who: A Doctor Who Podcast

Each week, Lee Shackleford, Kyle Jones and Clarence Brown gather to discuss interviews, news and reviews about BBC series "Doctor Who." With the show itself in its 12th modern season, the podcast is over 200 episodes strong, with recent shows preparing listeners for this year's WHOlanta: Virtual Tardis convention.

Hosts Kyle Jones and Clarence Brown leave no comic stone unturned with their dialogues about Marvel, DC, Titan, IDW and Boom! characters. Part of the Discussing Network, the show highlights both heroes and villains from both print and on-screen comics in its weekly broadcast.

Shellheads is a bi-weekly deep-drive for fans of "Teenage Mutant Ninja Turtles," whether a fan is seeking insight on the comics, television series or other media platforms the heroes have appeared in over the years. Hosted by Jeff from the "Warp Zone Arcade" and "Rebre"'s Sergio, the show recently finished its third season, which covered topics such as the "Power Rangers" crossover and the character Casey Jones, an ally of the pizza-loving team.

UPDATE: The following local podcasts have been added to the list since the originally printed version of this story.

"Godless in Dixie" aims to help those most deeply impacted by the process of choosing to leave their religion. As someone who holds a graduate degree from Reformed Theological Seminary, JPS schoolteacher Neil Carter draws on reader input from his blog by the same name to unpack the emotional and intellectual struggles a person faces on their way out of the church.

Released monthly on the 15th, the podcast features “conversations on culture from Jackson, Mississippi, taking a look at the people, the places and the events that make us the City With Soul.” Previous guests have included the City of Jackson’s Deputy Director of Cultural Services David Lewis; Big Apple Inn‘s Geno Lee; creatives Scott Allen and Mary Sanders Ferriss; and artist, Shon Perryman. Episodes are available on Spotify, Apple podcasts, Stitcher and other podcasting platforms.

Know of another podcast based in the Jackson metro we can add to the list? Send the information to [email protected].