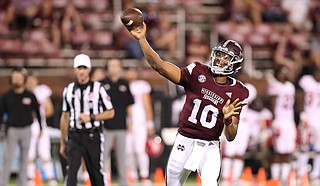 In July of this year, Jackson State University, Alcorn State University, Mississippi Valley State University and Millsaps College all surmised that football was moving from fall to spring. Other nearby schools played the waiting game until their respective conferences made a decision on whether they should play or wait for spring.

The SEC finally made a decision to play a 10-game conference-only schedule. The 2020 SEC college football season will start on Sept. 26 and will conclude with the SEC Championship Game on Dec. 19.

Each team in the SEC currently plays an 8-game conference schedule and those eight games scheduled to be played this season are still on the schedule. Now the University of Mississippi and Mississippi State University wait to find out who their other two foes will be for 2020.

As of press time, the SEC has not released a schedule, and that could mean changes like the Rebels and Bulldogs not ending the regular season playing the Egg Bowl. In fact, the two schools could open the season playing against each other. Until a schedule is released there is no telling when and where games will be played.

Conference USA has not officially made a decision on the 2020 season either. It seems like the conference is going to try to play in the fall and play out of conference games. The University of Southern Mississippi, a member of C-USA, has had its schedule affected by other conferences.

Southern Miss lost games against Jackson State and Auburn. The Tigers, a member of the SWAC, were dropped off the Golden Eagles schedule when the SWAC moved to spring football. The Auburn game was dropped from the USM schedule when the SEC went to a conference-game-only plan for playing football in the fall.

The Sun Belt Conference and the American Athletic Conference both have decided to play an eight-game conference schedule and four games out of conference. C-USA could use the same model as their fellow Group of Five schools.

At the Division III level, the American Southwest Conference has decided to delay the fall sports of cross country, soccer, volleyball and football until spring. Belhaven University is a member of the ASC and will not play football this fall, but hopefully will play in the spring.

In a surprising move, the Mississippi Association of Community Colleges has decided to play football this fall. The season will start Oct. 1 and will consist of six games that are division-only and conclude with a playoff.