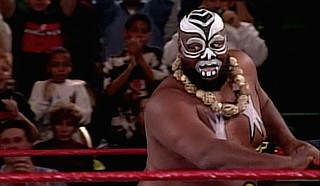 The name James Harris might not mean much to anyone that hears it. But if you were a fan of professional wrestling in the 1980s and 1990s, the name Kamala will instantly be familiar.

Harris was born in Senatobia, Miss., on May 28, 1950, and grew up in nearby Coldwater and was hit by tragedy early in life. At age 4, his father was killed during a dice game.

Growing up in the Jim Crow South, Harris worked by picking cotton and driving trucks. Unable to make a living, he moved to Benton Harbor, Mich., where he soon began his pro wrestling career.

At first, Harris used the names Sugar Bear Harris, Mr. Harris and the Mississippi Mauler. A chance meeting with Jerry “The King” Lawler gave Harris the chance to become a star in wrestling.

Lawler had Harris wear face and body paint and walk barefoot to the ring wielding a spear and mask while wearing a loincloth. Harris' character supposedly could not speak English, and he could only speak and grunts and yells and strikes to his belly. The idea behind Lawler’s creaton was a caricature of Ugandan dictator Idi Amin.

While the character has been criticized for the use of racial stereotypes, Harris himself said he did not mind playing Kamala. The identity would end up making Harris a main eventer in pro wrestling.

In the World Wrestling Federation, now known as World Wrestling Entertainment, Harris wrestled stars like Hulk Hogan, Jake “The Snake” Roberts and the Ultimate Warrior. He faced Andre the Giant in a series of matches until Andre’s health forced him to stop wrestling.

He would leave the WWF and wrestle in Ted Turner’s World Championship Wrestling before returning to the WWF. Once again, Harris would face Hogan for the World Wrestling Championship and face off against The Undertaker.

Because his character could not talk, Harris had several managers speak for him. Harris was managed by Skandor Akbar, The Wizard and Kim Chee, among the many managers.

Harris wrestled in several promotions including the Continental Wrestling Association. In Mid South Wrestling he had matches against the Junkyard Dog and Hacksaw Butch Reed.

In 1992, Harris was diagnosed with diabetes but failed to keep up with treatments and ballooned in weight in later years. Harris made brief appearances in the WWE with the last coming in 2006. He wrestled his last match on the independent circuit in 2010.

At age 70, Harris known as Kamala or the Ugandan Giant contracted COVID-19. The WWE announced on Sunday, Aug. 9, that Harris had passed away. Kenny Casanova, who co-authored Harris’ autobiography, “Kamala Speaks,” confirmed that Harris passed from the coronavirus.