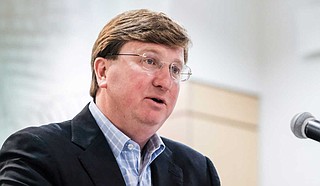 Mississippi Gov. Tate Reeves killed a bill but not an idea when he vetoed the Mississippi Correctional Safety and Rehabilitation Act of 2020, which would have made more inmates eligible for the possibility of parole. Photo by Ashton Pittman

JACKSON, Miss. (AP) — Mississippi Gov. Tate Reeves killed a bill but not an idea when he vetoed the Mississippi Correctional Safety and Rehabilitation Act of 2020, which would have made more inmates eligible for the possibility of parole.

Advocates for criminal justice changes are still saying Mississippi needs to ease the moral and financial burden of a prison system that is the subject of multiple lawsuits over safety and sanitation and that is under investigation by the U.S. Justice Department.

The push for change is coming from groups across the political spectrum, including the liberal Poor People's Campaign and the libertarian Mississippi Center for Public Policy.

In an email last week, the Center for Public Policy wrote about Mississippi habitual-offender laws that keep people imprisoned for years. It cited the case of Tameka Drummer, who received a life sentence in 2008 after she was pulled over for an expired license plate in Alcorn County and officers found a small amount of marijuana in her car. Drummer was sentenced as a habitual offender because of previous convictions.

“Multiple bills that would have impacted habitual offender laws did not make it past the finish line this session and another bill that would have reformed parole for up to 2,000 prisoners was vetoed by Gov. Tate Reeves," the center wrote. “That shouldn’t be the last word. We know much needs to be done.”

The Republican governor wrote in his July 8 veto message that he had received calls from law enforcement officers and prosecutors concerned about the release of inmates with violent histories.

“While the spirit of Senate Bill 2123 is well-intentioned, I believe the scope of its proposed expansion of parole eligibility presents problems that have not been fully considered by all stakeholders and as drafted would threaten public safety,” Reeves wrote.

Mississippi has one of the highest incarceration rates in the U.S., and the Justice Department announced its investigation in February, weeks after outbursts of violence led to the death and injury of several inmates. More than 70 inmates have died in Mississippi prisons since late December.

During an Aug. 20 news conference, representatives from the Poor People’s Campaign and other groups sharply criticized Reeves for vetoing the parole bill.

Alesha Judkins is the Mississippi director of FWD.us, a group that published a report last year saying that Mississippi's habitual offender laws are causing “extreme” prison sentences. Judkins said Aug. 20 that the vetoed bill would have brought Mississippi in line with states such as Texas, Utah and Louisiana that have broad parole eligibility.

“The governor’s claim that the bill goes too far and eliminates protections are misleading,” Judkins said.

She said Parole Board members, who are nominated by the governor and confirmed by the state Senate, would consider statements from crime victims.

“As we all know, parole eligibility makes prisons safer by restoring incentives and hope to people serving long sentences behind bars,” Judkins said.

FWD.us was formed in 2013 by Facebook founder Mark Zuckerberg and other technology and business executives. The group says on its website that it focuses on “fixing the failed immigration and criminal justice systems that have locked too many out of the American dream for too long.”

Senate Bill 2123, which passed with bipartisan support, said people convicted of nonviolent offenses could become eligible for parole after serving 25% of their sentence. Those convicted of violent offenses and sentenced between July 1, 1995, and June 30, 2014, would have become eligible for parole after completing 50% of their sentence or after 20 years, whichever comes first.

The bill would have allowed people convicted of most violent offenses after July 1, 2014, to become parole-eligible after serving 50% of their sentence served or after 30 years, whichever is less. The bill also would have allowed parole hearings for those 65 and older who have served 10 years of their sentences. Habitual offenders, sex offenders and inmates sentenced for capital murder would not have been eligible for parole.