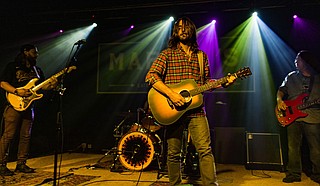 Some sages say that a person sometimes has to leave a place to fully appreciate it. For Jonathan Yargates, a music artist who recently returned to the Jackson area after spending the last 10 years toiling over and perfecting his craft within the competitive music scene of Austin, Texas, this sentiment rings true.

Indeed, since making the metro home again, Yargates has been prodigiously writing and recording new material. He also holds down the Saturday afternoon gig at Shaggy's, alongside his best friend and fellow Jackson music icon, Chad Wesley.

Days before his Oct. 25 Jackson Free Press interview, Yargates lost a close friend and supporter, Brandon Taylor. The musician learned of Taylor's passing on his way to a performance in Natchez, and he honors his friend's memory through increased efforts in the music front.

"We met in Fondren and became good friends. We made a video together about Fondren nine or 10 years ago that was pretty humorous. He was a big supporter of mine through all of the art stuff I've ever done," Yargates says. "This whole year because of COVID I haven't been able to get sh*t done, and I needed to change that mentality—he would have pushed me to do that."

Born in Pittsburgh, Pa., Yargates and his family moved to Brandon when he was 2 years old. From a young age, his music influences were broad and ecumenical, as well as initially inherited.

"I pretty much listened to anything my dad listened to, which most kids have to do, but at least it was a generation of great music. I don't think any kid was mad that they had to listen to the Beatles—we all learned to love the Beatles in our own way," he says. "Z-106, the Jackson station that has been around forever, that's the one that everyone listened to for rock 'n' roll, period."

Later, Yargates discovered artists on his own who served as role models for the aspiring musician.

"The first musician that became my own interest was Prince. I remember thinking 'One day, I'm going to have the balls to be somebody like him'—meaning I'm going to get on stage and play guitar like him and have the confidence to express myself without any fear," Yargates says.

At 17, Yargates cut his live-performance teeth at a Clinton bar called Gravity. A few years later he caught on with the Jacktown Ramblers, an americana-style outfit that quickly became popular in Jackson.

"The Jacktown Ramblers were americana, but we had a lot of blues influences in there as well," he says. "(During live shows), we were extremely energetic, like a punk band. That was the idea. We wanted to make pretty albums but blow you away when you saw us."

As a solo artist, Yargates re-recorded "Good Shot Boy," a song he originally wrote with the Jacktown Ramblers as an uptempo bluegrass and folk romp—this time without the bluegrass overtones.

The new, 2018 version maintains the crackling melody while delivering the lyrics in an ambiguous tonality pleasingly evocative of School of Fish vocalist Josh Clayton-Felt. The product, paradoxically, results in a strangely disconnected, yet utterly engaging stylistic delivery. The song has since become a staple of Yargates' solo performances.

Yargates says the chorus details a young man deciphering adult relationships: "I've got no issues with the Lord / I admire that he's so adored / I just believe in what I see / And a handshake means more to me / I'll try to figure the answer how / To turn this crazy life around / I'll make no guarantees / And I'll choose what right will be."

While in Austin, Yargates immersed himself in the city's dynamic music community, later heeding the entreaties he regularly received from Jackson music luminaries Chad Wesley and Jason Turner to return to Mississippi.

COVID-19 had already shut down the live-music scene in Austin—including the SXSW music festival for which Yargates was scheduled to perform—and he found himself professionally stuck in neutral. The timing seemed propitious, and in March he packed up his guitars and bid farewell to Austin.

Once back in Jackson, Yargates renewed his commitment to writing and performing new material. Feeling that the Jackson music community had become too cutthroat—to the detriment of any performer trying to get bookings in an attenuated market for live music—Yargates has made it a personal mission to foster a more cooperative and supportive vision within the Jackson music ecosystem.

"This city does have a ton of musical talent. I've scoped out a lot of people, I've checked out a lot of younger bands, up-and-coming performers. There's so much potential for a (stronger) scene to develop—I feel people really need to put more into it," he says. "I've been trying to set an example by going out and supporting other performers. Chad (Wesley) and I will go to people's shows. We'll go to the open-mic shows and try to boost them up."

The 35-year-old musician criticizes how "hyper-competitive" local music has become in the metro, suggesting that artists should be more united and supportive.

"You can't wait for someone to come rescue the scene. We have to build this ourselves, by not stepping on each other's backs, and by being supportive of one another. This is an artists' community," he says.

Excited over the emerging talent in Jackson, Yargates praised a handful of musicians during the interview, including Chad Perry, Brian Belew and Brian Shaw. Shaw, who presently drums with the band Watermelon Slim, got his start in Yargates' band when Shaw was 17. "Watching him play with Watermelon Slim, I felt like a proud big brother. Man, he is something," Yargates says.

For Yargates, the immediate future is tantalizing. On Dec. 17 and 18, he will appear at Ghost Train in Birmingham, Ala., and he plans on having an intensive guitar workshop with Chad Wesley in January.

"The big picture really is me being back on the electric guitar. I want to focus on the Hendrix-meets-Dylan sound I stumbled across with the guys in my band (Brad Carter, drums; Steve Ramsey, bass)," Yargates says. "I'm back in Mississippi, and I want to pick up where I left off now that I'm more mature and have my act together."

Listen to Jonathan Yargates on Spotify, iTunes and other streaming platforms.