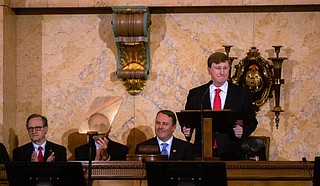 The Mississippi Supreme Court ruled on Thursday that Gov. Tate Reeves was within his authority when he vetoed a budget bill last July, overturning a chancery court judge's October. Courtsey

JACKSON, Miss. (AP)—Mississippi Gov. Tate Reeves acted within his rights when he partially vetoed a budget bill last July, the state Supreme Court ruled Thursday. The decision is a reversal of a chancery court judge's ruling in October.

“Our Constitution and case law are clear that the power exercised by the Governor was granted to the Governor’s office by the people of Mississippi,” the Supreme Court's ruling reads.

In a statement Thursday, Reeves’ spokesperson, Bailey Martin, said he was pleased the state’s high court “interpreted the constitution the way it was written.”

“This will be an impactful decision—protecting taxpayer dollars—for a long, long time,” she said.

At issue was House Bill 1782, which proposed allocating a total of about $130 million in federal coronavirus relief money to various agencies.

In a section allocating $91.9 million to the Mississippi Department of Health, Reeves vetoed a part of the bill that earmarked $2 million of the $91.9 million for North Oaks Regional Medical Center, a hospital that is closed in Tate County. The governor said because it was closed, North Oaks had not provided care to COVID-19 patients.

Reeves also vetoed $6 million to the MAGnet Community Health Disparity Program. He wrote that he was uncomfortable spending that money because he was unfamiliar with the program.

Reeves did not veto other stipulations of the bill, such as that the Mississippi Department of Health give $1.5 million to federally qualified health centers, $1 million specifically to rural hospitals and $80 million to other hospitals.

Citing rulings from the Mississippi Supreme Court in 1995 and 2004, Hinds County Chancery Court Judge Tiffany Grove wrote in her October decision that while a governor has some rights to veto parts of appropriations bills, a governor cannot approve an appropriation and then veto the conditions of that appropriation.

In Grove’s decision, she said that the two allocations were “not separate, distinct appropriations,” but conditions of the $91.9 million appropriation to the Mississippi Department of Health, which Reeves did not specifically object to.

“Despite his admirable intentions, the Partial Veto by Governor Reeves constituted ‘creative legislative power’ which is outside the purview of his executive authority,” Grove wrote.

However, the Mississippi Supreme Court disagreed. It said that although the money was all funneling through the Department of Health, it can't be considered one appropriation as it was being sent to many different organizations.

The ruling means that the state will not have to pay $2 million to North Oaks Regional Medical Center and $6 million to the MAGnet Community Health Disparity Program. The case will not be reheard.