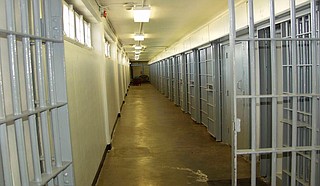 The Mississippi Department of Corrections said autopsies are being done on inmates who died in recent days. Photo courtesy MDOC

JACKSON, Miss. (AP) — The Mississippi Department of Corrections said autopsies are being done on inmates who died in recent days.

The department said in a news release Monday that William Stanley Wilson II, 42, died Friday in the hospital of the Mississippi State Penitentiary at Parchman. Wilson had been in and out of the hospital during the past year.

Wilson was convicted in DeSoto County of murder, kidnapping and first-degree arson. He was sentenced to 10 years on May 11, 2009, after pleading guilty to kidnapping a minor. A jury later convicted him of killing a woman and setting her home on fire in an unrelated case, and he was sentenced as a habitual offender on Oct. 28, 2009.

The department said Saturday that that Ronald Allen Estelle, 77, was pronounced dead Friday at Allegiance Specialty Hospital of Greenville. Estelle had been taken there from Parchman. He was sentenced Feb. 11, 1987, for nonresidential burglary as a habitual offender in Harrison County.

The department said in a separate news release that Stephon Hudderson, 58, died Wednesday in the infirmary of South Mississippi Correctional Institution. Hudderson was serving a 60-year sentence that he received July 20, 2005. He was sentenced as a habitual offender for sale of controlled substance in Pearl River County.

At least 100 inmates have died in Mississippi prisons since late last year. Several inmates died during outbursts of violence in late December and early January. The U.S. Justice Department announced in February that it is investigating the state’s prison system.