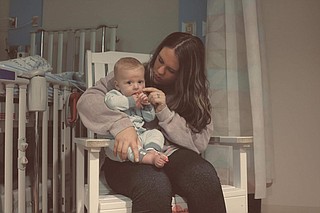 Sierra Rood, along with more than 200 other Mississippi families, may permanently lose the Medicaid eligibility that keeps their children at home, after the Mississippi Division of Medicaid changed authorization vendors. Photo courtesy Sierra Rood

John Riley Rood, now 10 months old, was born with a hole in his larynx, a rare birth defect that allows food and liquid into the lungs. Unbeknownst to doctors, John Riley experienced chronic aspiration of foreign matter for the first five months of his life. He now suffers from a raft of life-altering issues, including chronic lung disease, frail muscle growth and critically delayed mental development.

In January, his family got the phone call they dreaded. Alliant Health Solutions told them John Riley's Medicaid eligibility is under review, giving them a limited window to appeal or risk losing coverage entirely. Funds from Medicaid are all that stands between the Roods and bankruptcy. In his first year of life, John Riley's medical bills exceeded $100,000.

"I don't know why they're denying people. It's not making any sense. All the people I know that have gotten denied or accepted—there's not a criteria that's being consistently followed," Sierra Rood, John Riley's mother, told the Jackson Free Press. "And they don't tell you what requirements they go on when they make these judgments."

Slim Chances for a Reversal

The official line on the sudden reversal in eligibility is that many of the families eQHealth approved for Medicaid did not actually qualify for the program, due to a combination of income level and the care their children require. There are no income restrictions on the Katie Beckett waiver, but families below the federal poverty line qualify for Medicaid without it.

Molly Berry said in an interview that the call came as a shock. Her son Charlie, 10, has Duchenne's Muscular Dystrophy. DMD is the most severe form of the disease, weakening Charlie's muscles to the degree that merely keeping him able to move takes up a huge part of Berry's day. Only recent advances in medical science allow children with DMD to live into adulthood.

Despite qualifying for Medicaid as far back as 2013, Berry and the rest of her family must wait with bated breath for the final results of their appeal.

"Overall Medicaid has saved us $2.5 million. Charlie's drugs cost $22,000 a week, and that doesn't include therapy," Berry said in an interview. "Without that level of care, he likely wouldn't be with us."

The common thread through these stories is the category of Medicaid eligibility the children share: Disabled Child Living at Home, also known as the "Katie Beckett waiver." President Ronald Reagan established the waiver in 1981 to extend Medicaid coverage to children whose medical needs justify institutional care, but for whom at-home care is possible.

On paper, a physician's order, or prescription, of institutional care is based on a non-specific set of criteria. Doctors may assign multiple different levels of institutional care, and not all of them qualify a child for the waiver. None of the families contacted for this story expressed a complete understanding of the information Alliant requested.

More than 200 Mississippi families have similar battles ongoing today, with 126 children receiving technical denials, in which final judgment awaits additional information. Alliant denied 79 more children outright. Families can appeal this decision, but for many, chances for a reversal are slim.

The Katie Beckett waiver allowed John Riley, Charlie and over a half-million other children to receive care at home while their parents work. Now, John Riley spends five days a week receiving intensive therapy at DeSoto Pediatric Extended Care. If he loses his Medicaid eligibility for good, it will threaten the Roods with more than financial ruin. The facility that has worked tirelessly to ameliorate his condition only accepts Medicaid and disability. No private insurance will suffice, leaving the Roods without the support—or the child care—that they depend on.

Sierra Rood is fortunate, compared to some other families. She received a technical denial, not an authoritative rejection. The denial came with no information clarifying what data she needs to provide. She spent a week bouncing between doctors and specialists, seeking every bit of information she could possibly find to justify John Riley's Medicaid coverage. Now she awaits the results of her appeal, fearing the worst.

Other families face even more dire circumstances. Families of children with cystic fibrosis, a potentially fatal condition that affects the respiratory system, are reporting total revocation of Medicaid eligibility.

Clarity on the issue for the families affected seems impossible to find. Every parent reached for this story complained of the opaque nature of Medicaid's process. In multiple conversations and interviews, parents shared with the Jackson Free Press a byzantine array of requirements, cryptic messages and pitfalls. Some believe Alliant expects them to prove a certain level of developmental delay, desperately seeking IQ tests for children as young as 2 years old.

Others worry that if a doctor confirms the requirement of institutional care, the State may take their children away—a fear experts like Polly Tribble, executive director of Disability Rights Mississippi, say is understandable but totally unfounded.

Tribble did, however, confirm that parents who appeal their child's denial and lose may need to reimburse the State for the cost of care between appeal and final denial, leaving families affected at a virtual roulette table, wagering their financial security for their children's survival.

The Mississippi Division of Medicaid did not respond to requests for interview by press time.

One legislator, Sen. Chad McMahan, R-Guntown, is attempting a partial fix. Senate Bill 2180 expands Medicaid eligibility to disabled children living below 300% of the federal poverty line—an income of roughly $78,000 a year for a family of four—even if they do not meet the institutional-care requirements of the Katie Beckett waiver.

"My heart's broken for some of these families. I'm just distraught over it. I see some of these children, and I think, 'How can they possibly not meet these requirements?'" McMahan said in an interview. With the assistance of the Division of Medicaid and the Department of Rehabilitation Services, McMahan drafted the bill, expecting it to address the needs of between 50 to 75 of the affected families.

Lindsey Eubanks is the mother of Lucas Eubanks, 3, who suffers from a juvenile form of Lou Gehrig's disease. She worries that the bill does not go far enough. Mississippi families making more than $78,000 a year may be well off comparatively, but in the face of annual medical bills in the hundreds of thousands of dollars, even relative wealth evaporates.

McMahan stressed that the cap is out of his hands. "This 300% cap is a federal regulation. If I remove it, no one will get the waiver. None of them," he said.

Eubanks is sympathetic to McMahan's position. She believes the restrictions come from the federal level as well. Last year, the Centers for Medicare and Medicaid Services announced the Medicaid Fiscal Accountability Rule, ostensibly to crack down on "fraud." But experts suggested to the website Modern Healthcare that such regulations were cost saving measures, meant purely to reduce federal contributions to Medicaid.

Rood spoke to the Jackson Free Press from work over the weekend, her son John Riley at her side. No one else was available to care for him, and she had to make up for the hours missed scrambling to prove his eligibility during the week.

Her voice could not conceal her emotion. "We have money for wars and walls," she said. "How can we not care for the least of our own people?"