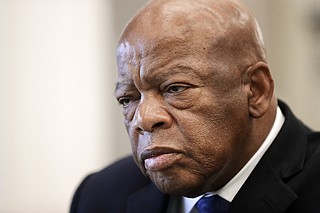 The NAACP will honor John Lewis for his Congressional service and long history as a civil rights activist by presenting him the Chairman's Award at its annual arts and entertainment awards show. Photo by Mark Humphrey/AP Photos

ATLANTA (AP) — The NAACP is honoring John Lewis for his Congressional service and long history as a civil rights activist.

The nation's oldest civil rights organization announced Tuesday that it will bestow the Chairman's Award on the Georgia Democrat later this month at its annual arts and entertainment awards show.

The 79-year-old congressman announced in December that he has advanced pancreatic cancer. Lewis is the youngest and last survivor of the Big Six civil rights activists, a group once led by the Rev. Martin Luther King Jr.

In a statement, NAACP Chairman Leon Russell called Lewis a “modern hero in American history” who has “dedicated his life to protecting our constitutional rights, fighting injustice and speaking truth to power.”

The Chairman's Award goes to people who show exemplary public service and “create agents of change,” according to the NAACP. Past recipients include filmmaker Tyler Perry and then-Sen. Barack Obama.

Sometimes called the "conscience of the Congress," Lewis led hundreds of protesters in the 1965 Bloody Sunday march across the Edmund Pettus Bridge in Selma, Alabama. He was at the head of the march when he was knocked to the ground and beaten by police. The nationally televised images drew the country's attention to the racial inequalities King and others were fighting.