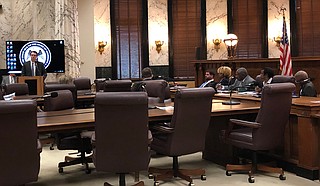 Formerly incarcerated Mississippians who are entering the workforce continue to face obstacles to employment, advocates testified Tuesday at the Mississippi Capitol during a Senate Labor Committee hearing.

The hearing included a discussion of "Ban the Box," also called "Fair Chance Hiring," which prevents employers from requiring formerly incarcerated people to disclose felony convictions on job applications, and which Sen. John Horhn, D-Jackson, the chairman of the committee, supports.

Other suggested solutions included allowing people with convictions to obtain occupational licenses and eliminating the waiting period before Mississippians can apply for expungement of criminal records.

Jackie Turner, executive director of the Mississippi Department of Employment Security, revealed to the committee that the State of Mississippi's current seasonally adjusted unemployment rate is 4.7%—the lowest it has ever been. Despite the state's decreasing unemployment rate, though, Mississippi continues to experience a labor shortage.

James Robertson, the director of employability and criminal-justice reform for Empower Mississippi, attributed the state's struggling labor pool in part to Mississippi's incarceration rate, currently the third highest in the country. "Because of that, we have about 5,000 or 7,000 leaving our state correctional facilities every single year, with a felony conviction, coming back into our communities and being unable to find work," he said at the Jan. 11 hearing.

Federal law does not prevent employers from inquiring about an applicant's criminal history. Having to disclose a felony conviction on a job application not only can lead to discrimination, advocates say, but can also discourage those with convictions from even applying for a job in the first place.

At least 35 states have adopted "Ban the Box" legislation, as well as 150 cities and counties throughout the country, including Missouri, Georgia and Tennessee. It is not a blanket policy, but one whose rules and implementation vary according to where it is implemented. In some places, the policy requires employers to wait until the interview period to ask a person about their criminal record, but in others, companies may not be able to find out about a person's criminal record until they are ready to offer him or her a job.

"Ban the Box" does not deny an employer the ability to know the criminal record of prospective employees. Rather, it aims to eliminate barriers of social stigma against people with felonies, by deferring access to the criminal records until after applicants have had a fair opportunity to present themselves and their qualifications for the role, its advocates argue.

Robertson proposed additional policies to support formerly incarcerated Mississippians seeking employment, such as lifting restrictions on their ability to obtain occupational licenses. Last year, the Mississippi Senate passed Senate Bill 2871, also called the "Fresh Start Act," to allow people with convictions to obtain licenses for a small number of occupations. But licenses are required for more than 60 occupations in Mississippi, so Robertson urged lawmakers to consider expanding on the achievements of the 2019 bill.

"Mississippi is more restrictive than other states," Robertson said of the five-year requirement. "The issue we see a lot of folks encountering is that most people who are released from prison have some amount of time to serve on parole or probation, after their release, and that can be up to five years. So when you tack a five-year waiting period on the end of that, a lot of folks aren't even eligible to apply for expungement until they've been in the community for a decade."

At the hearing, Mississippi State Penitentiary at Parchman Chaplain Marvin Edwards, who also heads the Mississippi Association for Returning Citizens, emphasized the importance of supporting formerly incarcerated people in the workforce.

"One of the biggest hardships for these guys when they're re-entering society is finding a job," he said.