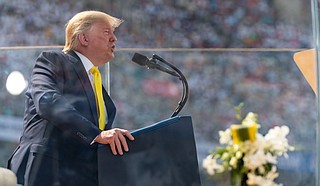 Dr. Emmitt Y. Riley writes that Donald Trump represents a "White Messiah" and a defender of what his supporters perceive as the last of a dying breed that has come under threat from a changing world. Official White House Photo by Shealah Craighead 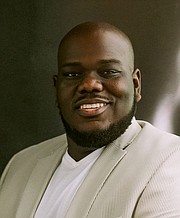 Several years ago, Cornel West, in his book "Democracy Matters," warned the public about what he considered to be three anti-democratic dogmas that threaten the very fabric of American democracy. He pointed to free-market fundamentalism, aggressive militarism and authoritarianism.

What we are witnessing now is the rise and solidification of an authoritarian president in the U.S. who has no respect for the fundamental values that the American Constitution holds dear. His attacks on the press, due process, racial/ethnic minorities and the solicitation of foreign influence in U.S. elections are precisely what Dr. West describes in the opening pages of his book. Although Donald Trump's disregard for American norms is undoubtedly unconventional, we have seen this ideology before.

To understand the political dynamics that are currently taking place in America, one must fundamentally grasp how the grips of "white supremacy" have clawed its paws into America's political institutions throughout much of American history. Radical conservatism also known as white nationalism, has always erupted during periods of perceived black advancement. During and following the Civil War era and the passage of the 13th, 14th and 15th Amendments, the United States witnessed the eruption of white nationalism in which hundreds of African Americans were lynched, denied the right to vote and excluded in almost every aspect of American political life. Just as African Americans exercised their rights to vote and thus increased political representation, white nationalists engaged in some of the most brutal forms of terrorism and gerrymandering to end black political representation.

Major victories during the Civil Rights Movement era in the struggle for equality, such as Brown v. Board of Education, the passage of the Civil Rights and Voting Rights Acts, were followed by the "War on Drugs" that primarily targeted African Americans. The election of America's first black President Barack H. Obama coincided with the rise of the Tea Party, the gutting of the Voting Rights Act in Shelby County v. Holder, and the subsequent election of Donald J. Trump.

What the Trump presidency has revealed is that "whiteness" will protect "whiteness" at all costs, especially when it comes to the majority feeling that their superior status is under siege. There is absolutely no doubt that had Barack Obama committed these offenses he would have been impeached and removed from office without question.

While Donald Trump is certainly not the cause of all of America's issues, he has come to symbolize, in essence, the "White Messiah." To many of his supporters, he is the defender of what they perceive as the last of a dying breed that has come under threat from a changing world. In many regards, he is the explosion of a political party that has for years engaged in racial appeals. It is not enough to say that Trump and those who support him fear a changing world. We must be unequivocally clear that the change that they most fear is racial change.

Donald Trump is arguably the embodiment of what the framers feared. The Trump presidency has brought grave damage to our political institutions, and he is incapable of unifying the country. The U.S. Senate has decided to abandon its duty in that this institution has turned a blind eye to the criminal activity of the president. The Republican-led majority in the U.S. Senate has decided that they are not even interested in hearing from members of the president's administration who hold direct knowledge about the question at the center of the impeachment trial. One must wonder why? Republicans aren't interested in hearing from witnesses because they know that witnesses such as former National Security Advisor John Bolton will likely corroborate that the president did solicit foreign aid in helping to get dirt on his political opponent. Republicans also fear that anyone who opposes Donald Trump will upset his core supporters, who are motivated by racial resentment and racial hatred.

Republicans have been all over the place when it comes to defending the president. They've argued that the "quid pro quo" never happened even though the president's chief of staff admitted to this during a press conference. When the evidence was overwhelming that the president did withhold military aid from Ukraine, Republican legislators then concluded, "well, this doesn't rise to the level of impeachment." Some have even suggested that while the president's actions were inappropriate, convicting the president would be "the political death penalty." Others say it is not appropriate for the U.S. Senate to remove a duly elected president.

All of these arguments are weak, inconsistent and represent political cowardness in that members of the U.S. Senate are so attached to this president that they will abandon their constitutional oaths to defend him. In a political climate where bipartisanship is rare, U.S. Sen. Mitt Romney displayed the political courage to do what was right when his entire Republican caucus fell in line with their party.

At the core of this debate are issues concerning separation of powers and the need to fundamentally reform presidential power and the impeachment trial procedures. We have a president that has failed to comply with congressional oversight authority. When members of the U.S. Senate voted to acquit and block witnesses from testifying, they unleashed an unchecked executive who will win at all costs. Sen. Susan Collins of Maine voted to acquit the president because she believes that Trump has "learned his lesson." When President Trump was asked about Collins' remarks, the president indicated that there wasn't anything to learn because he did not do anything wrong.

As expected, Mississippi's own "Public Hanging" Sen. Cindy Hyde-Smith, along with Sen. Roger Wicker, also voted to acquit the president.

While the impeachment articles have nothing to do with race, the political era that gave birth to Donald Trump's presidency has everything to do with race. Michael Tesler, a political scientist, finds that during and after the Obama era, partisan attachments in the U.S. have become racialized and are now a function of racial resentment. Other studies have found that 70 percent of Trump supporters believe that whites face a lot of discrimination in today's society, and more than 60 percent of Trump supporters believe that blacks, Hispanics, and Muslims are violent and lazy.

Our political leaders have excused the president's behavior time and time again. Whether it's mocking a disabled reporter, bragging about inappropriately touching women, bullying a teenage activist, describing African countries as "shit-hole countries," or describing Hispanic immigrants as drug dealers and rapists, this president's behavior has been excused time and time again. The Republican Party, once a political party that campaigned on Christian values, has now traded its integrity for the acquisition of political power.

If there is any hope of keeping the Republic, it will require massive participation at the ballot box in November. Even though it might be disheartening to see politicians neglect their duties, we must always remember that the power of the Republic rests with good people. The acquisition, protection, and defense of our most fundamental rights as U.S. citizens require that we remain vigilant, engaged and active.

Dr. Emmitt Y. Riley, III is an Assistant Professor of Africana Studies and Political Science at DePauw University in Greencastle, Ind. Emmitt is a native of Itta Bena, Miss., and is an alumnus of Mississippi Valley State University, Jackson State University, and the University of Mississippi. His research examines racial resentment, political representation, and African American Politics. Follow him on Twitter at @drriles06.