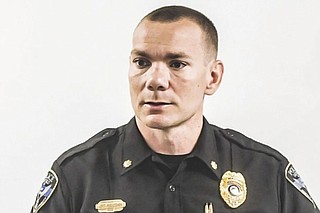 OXFORD, Miss. (AP) — The Oxford Police Department is getting a new police chief — sort of.

Capt. Jeff McCutchen will be officially sworn in Monday as the department's top cop, but it won't be that big of a change. McCutchen has been running the 100-person department for the last 11 months as interim chief when former chief Joey East took leave to run for Lafayette County sheriff.

For most of 2019, the 17-year law enforcement veteran kept the status quo at the department. At the same time, he was looking at ways to bring his vision to the OPD, the Northeast Mississippi Daily Journal reported.

“We will continue to serve the community with wisdom and compassion,” McCutchen said. “I want to move law enforcement into a better place in the community. We are servants – public servants. We serve others first. It’s not about us.”

He plans to slightly alter the command structure at the top of the department. Instead of two majors and four captains under the police chief, he plans to have a deputy chief and five captains.

“We will move some of the responsibilities and simplify (the organizational chart),” McCutchen said. “We will take the resources for the second major and redirect those to the front line.”

A couple of programs he plans to keep are the new hire orientation and the front line meetings, where rank-and-file officers get together regularly to discuss problems within the department and how those problems can be resolved.

Growing up in rural Union County, McCutchen wasn’t sure what he wanted to do in life. The son of a preacher, the family moved around in his younger years.

“I always had an interest in law enforcement. I loved the team aspect,” said McCutchen, who was a senior on the Ingomar basketball team that won the state title in 1999.

A chance conversation with a summer job coworker led him to become a jailer at the Tippah County Sheriff’s Office in 2002. The next year, he began working for the Batesville Police Department.

“I went to the police academy with seven Oxford officers and I was blown away by their professionalism,” he said. “I found out there was an opening here and since 2005, Oxford has been so good to me and my family.”

He started as a patrolman then worked with the grant-funded DUI unit. When a detective position opened, he jumped at the chance.

“That was a watershed moment. As a patrolman or with the DUI unit, you don’t see the full spectrum of a case, how it affects people,” McCutchen said. “It taught me a new perspective. You meet so many people in despair. It means something to them when you are able to return with answers or a problem solved.”

Since 2014, he has served as the major of operations, overseeing patrol, investigations and big events.