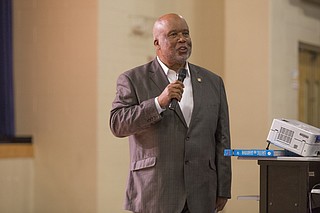 U.S. Rep Bennie Thompson, Mississippi's only Democrat in Congress, called Sunday for a federal investigation after inmates were killed by fellow prisoners across three prisons and an unknown number of inmates were injured in disturbances. Photo by Imani Khayyam

Prisoner advocates are calling on the federal government to investigate Mississippi’s prison system for possible civil rights violations, saying the violence of recent days highlights deliberate violations of inmates’ constitutional right to be free from cruel and unusual punishment.

The Southern Poverty Law Center and other groups say they will send the letter Tuesday to the U.S. Department of Justice. The Associated Press was provided a copy in advance. The letter warns that “it is no exaggeration to say more lives will be lost absent immediate intervention.”

“The Mississippi prison system is in a state of acute and undeniable crises, with five deaths in just the last ten days, and a history of preventable deaths and injuries stretching back years,” the 18-page complaint states. “Mississippi has acknowledged the danger presented by severe understaffing and horrific conditions, but has repeatedly failed to take appropriate action.”

U.S. Rep Bennie Thompson, Mississippi's only Democrat in Congress, called Sunday for a federal investigation after inmates were killed by fellow prisoners across three prisons and an unknown number of inmates were injured in disturbances. Mississippi prison officials, who called in state troopers and a special team of prison guards from Tennessee to help regain control of the situation, have said four of the deaths are related to violence between gangs.

The deaths and riots since Christmas have focused attention on a prison system that, by its own statistics, fills only about half its guard posts. Prison leaders are seeking tens of millions of more dollars to hire an additional 800 guards, as well as renovate a decrepit cell block at the Mississippi State Penitentiary at Parchman that was a focus of unrest. But lawmakers recommended a cut in operating funds for the three state-operated prisons. They recommended spending the same amount as last year on three private prisons and 15 county-run facilities that hold state inmates.

The letter cites an increasing number of deaths in state prisons in recent years, saying violence is “directly linked to acute understaffing” and that funding has declined.

“The state has functionally divested from its correctional system, with deadly consequences for the individuals who live and work within that system.”

The letter notes the Justice Department cited Alabama for “egregious” and “dangerous” understaffing at a time when Alabama had more prison guards per prisoner than Mississippi. A three-year federal investigation of Alabama's prisons concluded in April with a damning federal report and the threat of a federal lawsuit.

The letter says the low number of staff makes it impossible for guards to manage the prisons, and that gang control and inmate-on-inmate violence “is the predictable and preventable result of abdication of control of the facility.”

The prison system ran South Mississippi Correctional Institution in Leakesville on lockdown for almost all of 2019, citing a “severe shortage of correctional officers,” with Corrections Commissioner Pelicia Hall saying in a January 2019 release that “we are operating in a pressure cooker type situation right now.” The letter claims extended lockdowns may violate inmates' constitutional rights by leaving inmates "in conditions amounting to solitary confinement without access to basic privileges including recreation, showers, and visitation.”

The letter says SPLC has sworn statements from South Mississippi inmates showing that gangs assign inmates to cells and beds, control access to phones, determine where and when people may eat and shower, fine people who break gang-written rules and even conduct their own strip searches to locate stolen contraband. Sworn statements also say gang members work in the prison’s kitchen, withholding food to sell it or punish disfavored prisoners, and control distribution of mattresses and blankets.

The letter accuses outgoing Gov. Phil Bryant and incoming Gov. Tate Reeves of “trying to shift blame” to prisoners by focusing on gangs instead of accepting that officials are to blame for the violence. Bryant said Monday he would welcome a federal investigation into prisons, but said federal officials should also investigate criminals and gangs in the state's crime-challenged capital city of Jackson and across the state.