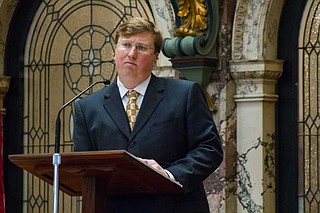 Republican Tate Reeves is completing his second term as lieutenant governor, and he is presiding over the Senate on Tuesday and Wednesday. Photo by Stephen Wilson

JACKSON, Miss. (AP) — Legislators are taking their oath of office Tuesday in Mississippi, and they will set the direction of state government for the next four years.

Republicans are maintaining control of the 122-member House and 52-member Senate.

The opening day is filled with formalities, a and many legislators were accompanied by relatives for the swearing-in ceremony.

Members of the House of Representatives are electing Republican Philip Gunn to serve a third consecutive term as speaker. They are also choosing a new speaker pro tempore, the second-ranking leader of the House.

Republican Rep. Jason White of West has enough support to become pro tem. He succeeds Republican Greg Snowden, who held the post two terms and was defeated in the party primary in August.

Senators on Tuesday are electing a new Senate president pro tempore because Republican Gray Tollison, who held that job in 2019, did not seek reelection to the Senate. His successor as second-in-command of the Senate will be longtime Republican Sen. Dean Kirby of Pearl.

Among the new lawmakers taking office is Democratic Sen. Sarita Simmons of Cleveland, who was elected to fill the seat long held by her father, Willie Simmons. He is being sworn in Tuesday as one of three state transportation commissioners.

Republican Sen. Melanie Sojourner of Natchez is returning to the seat she previously held. Sojourner defeated longtime Democratic Sen. Bob Dearing in the 2011 election, then Dearing defeated her in 2015. He didn't seek reelection in 2019.

Legislative sessions are scheduled to last four months during the first year of a term and three months during other years. However, Gunn has said he hopes legislators can shave at least a couple of weeks off the four-month session.