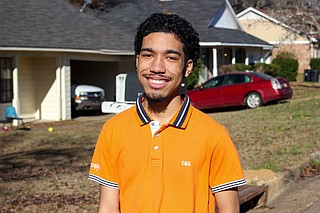 When colleges open the fall semester, a Jackson native will take his writing skills and experience eastward. Murrah High School senior Jeffrey Caliedo has been accepted to Yale University on a full scholarship. His admission to the prestigious Ivy League university exemplifies a fitting new chapter in the life of the 17-year-old scholar, writer and public speaker.

Caliedo, a talented writer, serves as the editor of both Murrah's school newsletter, "The Hoofbeat," and its literary magazine, "The Pleiades." His essay "Igneous," which recounts deep and personal experiences of his childhood, won a Scholastic Gold Key award.

"I love growing up in Mississippi a lot. There are a lot of happy memories I have, but at the same time being a black and Asian kid growing up in the Deep South was traumatic at times and had a lot of encounters that were not ideal," Caliedo says.

"It's welcoming and exclusionary all in one."

Caliedo expanded the theme into a portfolio titled "Silenced Voices" for his senior portfolio submission to Scholastic. The work, along with the mentorship and camaraderie he found at Murrah, helped the young author realize that the hobby he had loved since childhood could manifest into something much bigger.

"I've always been super passionate about writing, but I never knew it could be a full-time thing until high school," Caliedo says. "The welcoming environment at Pleiades and being constantly surrounded by writers helped me see writing as a valid career option and not just something I do for fun."

The senior now aspires to write and publish a book chronicling the experiences of his life in Mississippi.

Caliedo's success in speaking and performing complements his writing ability. He has garnered several accolades at numerous speech and debate competitions including qualifying for the National Speech and Debate Association Competition for the last three years. He serves the captain of his school's speech and debate team and was announced as a winner of the National Speech and Debate Association Academic All-American award in December.

"I used to have really big stage fright and anxiety about public speaking and performing, and (my sixth-grade U.S. history teacher) told me to sign up for the debate team," Caliedo says. "I was not that good at it right away, either, but the environment was so welcoming and supportive that I kept doing it. I found my niche."

On top of his various accolades, Caliedo participates in the APAC program and Murrah's Base Pair program, and was a student journalist in the Mississippi Youth Media Project. At Yale, he plans to study comparative literature and Spanish as a second language.