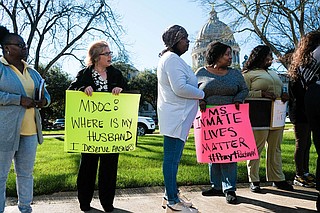 Supporters of prisoner rights and family members of inmates gathered outside the Mississippi Capitol on Jan. 7 to protest prison conditions and the ongoing crisis at MDOC that led to five inmate deaths between Dec. 29 and Jan. 3. Photo by Ashton Pittman

Less than an hour into 2020, Sunflower County Coroner Heather Burton took a phone call from the Mississippi Department of Corrections. An inmate had died at the Mississippi State Penitentiary at Parchman in a "gang-related riot," MDOC personnel told her. She arrived at the prison and pronounced 25-year-old Walter Gates dead at 12:22 a.m.

Days earlier, on Dec. 29, MDOC had locked down all prisons statewide after 40-year-old Terrandance Robbins died in what the State termed a "major disturbance" at the Mississippi Correctional Institution in Leakesville.

By Jan. 2, four inmates at Mississippi's prisons, starting with Dobbins, had died violently, including 26-year-old Gregory Emary, who died during a fight at the Chickasaw County Regional Facility that morning in Houston, Miss., and Roosevelt Holliman, who also died that morning amid an uprising at Parchman.

"All available resources are being used to address disturbances occurring around the state," MDOC said in a Jan. 2 press statement. "The MDOC is being responsible in investigating the violence."

Despite those efforts, another death occurred the next day, when 36-year-old Denorris Howell died during a fight with his cellmate, MDOC said. The agency claimed that his death was unrelated to the "major disturbances" happening at prisons across the state. The lockdown on all State prisons lasted until Jan. 7, when MDOC announced the end of the lockdown for all but two prisons—the Chickasaw County and Yazoo County correctional facilities.

On New Year's Eve, just days after the lockdown began, MDOC Commissioner Pelicia Hall submitted her resignation to Mississippi Gov. Phil Bryant, saying in a press statement that "while there have been many challenges, my administration has kept its focus on that goal."

But inmate deaths are not a new phenomenon in Mississippi. Some family members and activist organizations, like the American Civil Liberties Union of Mississippi, have pointed to a lack of funding to explain rising prison violence.

For eight years, Bryant and Reeves have overseen MDOC. Reeves, in particular, has served during that time as president of the Mississippi Senate, where he had the power to push for prison reforms and better funding for corrections in the state if he had wanted.

While prisons are often overcrowded, MDOC has about 500 unfilled staff positions. In a press statement last July, the ACLU cited low pay as a contributing factor to MDOC's recruitment problems.

The Legislature, though, which has chronically underfunded a number of state agencies in recent years, appropriated just $1.5 million during the 2019 legislative session. As of last summer, around 500 MDOC positions remained unfilled.

"Mississippi politicians talk about how tough they are when it comes to fighting crime, but we need to ask whether they are being smart," MacArthur Justice Center Director Cliff Johnson said in a joint statement with the ACLU last year.

"You can't throw people in prison for years on end for every offense under the sun and then act shocked when the prison population swells to 20,000, and you can't afford the astronomical price tag that goes along with having one of the highest incarceration rates in the world."

In that press statement, the ACLU strongly criticized the State's justice system.

"Dramatic increases in imprisonment over the last 40 years have brought prisons and jails across the state to the breaking point," then-Interim Director of the American Civil Liberties of Mississippi Josh Tom said in the July 2, 2019, statement.

"Changes in law and policy, not crime rates, explain most of this increase."