DOSSIER: Shame on WLBT for Dishonoring Past with Empty Crime Rhetoric 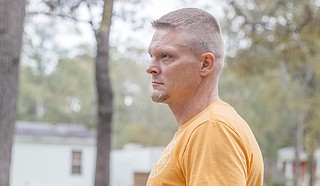 Former Simon City Royals leader Benny Ivey is critical of Jackson television stations for focusing on black crime inside Jackson. He is one of the capital city's first two official credible messengers. Photo by Imani Khayyam 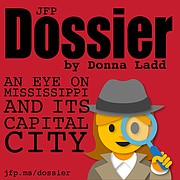 "As Mike Hurst said, quit denying there is a problem," WLBT proclaimed in an editorial today about violence in Jackson. With that unsigned piece, the NBC affiliate of the Atlanta-based Gray Television climbed fully on board with U.S. Attorney Hurst's false rhetoric that Jackson leaders and other locals are somehow "denying" gun violence in the capital city. WLBT clearly agrees with the Donald Trump appointee, who led Mississippi's ICE raids, that the solution is more policing, sweeps, roundups and empty rhetoric that do little more than score political points using crime hysteria that often leads the evening news at that station and the other local corporate newscasts as a play for ratings. Of course, Jackson TV stations seldom if ever critically cover policing approaches or report research on what it actually takes to reduce crime in a poor city.

In so doing, WLBT also dishonored its own past of overcoming very racist management starting when Lamar Life Insurance opened it in 1954. Leaders of that local insurance company, like most white leaders then, were anti-integration and sympathetic of the racist Citizens Council that had its national headquarters in Jackson until the 1980s and even had a bookstore for racist materials in its studios' lobby. Its station manager was an open member of the Citizens Council and used the station for racist propaganda. Like it does now with violence solutions, WLBT then ignored the Civil Rights Movement, as well as gave microphones to open racists (much like national networks including NBC did constantly during Trump's presidential campaign).

Those materials the Citizens Council sold in WLBT's lobby also fixated on crime and violence by black people, advocating massive (then-white) police enforcement, even arguing that black people are more prone to crime, one of the most racist arguments one can make. They sure didn't advocate multiracial, research-based community solutions to preventing violence. The Citizens Council wanted black people locked up and off the streets, and WLBT is echoing that sentiment now.

"Nothing is more important that (sic) getting a grip on this out of control crime," the WLBT editorial, offering no apparently knowledge of or interest in real solutions. It comes a bit close when talking about dilapidated properties—a large percentage of which are owned by the State of Mississippi—but shows no understanding of the various ways the City has tried to hold absentee owners accountable. Again, empty rhetoric. 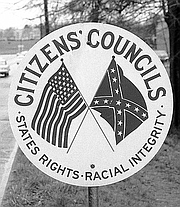 The Citizens Council, based in Jackson, published lies about the inferiority of African Americans for decades. It also ran whites-only academies.

What is truly tragic is that a group of people including church leaders challenged WLBT's FCC license because it was so racist then—and forced change in ownership. Of course, that change eroded over the years as the station was bought and resold, becoming known as a sound-off for then-station manager Frank Melton (who was black and union-busted against black employees) to use his "Bottom Line" editorials as a way to sensationalize black crime to build his own brand and eventually help take him into a disastrous term as mayor of Jackson with crime increasing on his watch after all his empty rhetoric.

What About the White Gangs?

Considering that WLBT reaches deep into the whiter Jackson suburbs and around the state, one wonders why violent white gangs and criminals in Rankin County and beyond don't merit these kinds of editorials.

It's especially ironic because one of WLBT's reporters, Therese Apel, used to cover the cops beat at The Clarion-Ledger and then became a law-enforcement spokeswoman before joining WLBT. She used her platform at the Ledger to outright advocate for a new gang law in 2017, and after it failed again in 2018, making it easier to arrest people for supposed gang affiliations, rather than for actually committing crimes or violence. Her stories seldom-if-ever quoted not-law-enforcement experts on gangs or violence, and she as well as the gang bill's law enforcement backers loved to say that a huge percentage of gang members in Mississippi were white.

So, the reasoning seemed to go, a strong gang law could not possibly be racist.

Except that I figured out that the existing gang law had only been used against African Americans from 2010 to that point in 2018. So let's just say that the hand-waving about white gangs, while based in some fact, seemed rather disingenuous considering the disparate treatment of black and white gang members.

The Rise of America's White Gangs

Donna Ladd reports for The Guardian on the largely ignored rise of white gangs in America, and how they're treated differently from black and Latino gangs. Photo: Imani Khayyam

When I first interviewed former Simon City Royals leader Benny Ivey for a 2018 Guardian profile, he criticized the way Jackson-based TV networks fixate on black crime while ignoring white crime (and the causes for all of it) a few miles over in Rankin County. "We watch the news every morning," Ivey told me at his Rankin County home. "My little girl comes in here and says, 'Why do black people commit so many crimes?'"

"Baby, because we have Jackson news, and there's two-thirds black in Jackson," he tells her. "White people do bad, too."

Local news, however, convinces white people that crime and violence are a black problem and the fault of black leaders in denial—the same meritless rhetoric that always drove racism in Mississippi. It doesn't matter that the mayor's own brother was a victim of gun violence or that council members like Ward 2 Councilman Melvin Priester Jr. regularly address violence in serious ways and even go along with questionable policing strategies on occasion.

But we don't exactly hear leaders like Hurst lambasting white leaders of non-Jackson areas plagued by crime and violence and white gang members, but would rather it not make the evening news. "To the politicians: Quit denying there's a gun problem in Jackson," Hurst scolded in a late-December press conference. "Quit denying there's a crime problem, a drug problem, a gang problem, in our capital city."

This is empty gamesmanship. Hurst knows full well that Jackson leaders know there is serious gun violence, gang and drug-addiction problems here just as there are in other poverty-ridden communities (including white ones) around the state and the nation. They talk about it constantly. (And my newspaper has actually talked to the experts and reported the BOTEC report findings that WLBT, Apel and Hurst and other media here ignore for years now in a special solutions archive.)

What Hurst likely doesn't like is that not everyone thinks his style of task forces and sweeps and tough-guy rhetoric does much of anything to lower the gun violence here—because we actually pay attention to the real research instead of wild-wild-west posturing. I've seen no indication that Hurst actually does his homework on these issues. In fact, he told me in an interview in his office in 2018 that Project Eject was modeled on the Boston Gun Project (an approach also known now as Operation Ceasefire), a comparison that its primary designer and promoter, criminologist David Kennedy, rejected bitterly to me in an interview the very next week. He warned that the model, based on the old Project Safe Neighborhood approach, was often used in a racist way and did not prove out over time.

But, you know, Mississippi is a low-information state, and we're supposed to just believe what folks like Hurst and WLBT employees perennially tell us about crime prevention regardless of efficacy or constitutionality: lock 'em up and throw away the key.

What WLBT didn't acknowledge in that editorial is that there is a fledgling effort in Jackson to embrace one of the most research-backed crime-prevention approaches in the U.S.—the Cure Violence model of credible messengers and violence interrupters. They didn't mention (or, to my knowledge attend or cover) attend any of the anti-violence community dialogues Rukia Lumumba and others have hosted. They sure haven't covered any of the cause-solution-focused Youth Crime Forums.

That is, neither the causes of violence nor the many potential solutions seem all that interesting to the lock-em-crowd as they gear up to push the expanded gang law yet again this session through the Legislature after taking last year off from trying. (I just saw Apel tweeting about it. Here we go with the PR cycle.)

But people like Benny Ivey and Terun Moore, Jackson's first two official credible messengers who both spent years in prison, are doing the real work of outreach to young people (locked up and not) to actually prevent crime and violence. They are studying and willing to put themselves on the line to actually cure violence and stop the cycle.

The only thing we are missing with this valid approach is ample resources and public study and embrace of what violence prevention actually looks like. Of course, they also ignore the research and the expert warnings that their brand of over-policing actually increases violence for a variety of reasons, including disruptions in local criminal organizations. Benny Ivey told me about violence increasing in the lower ranks of his Simon City Royals chapter after he was locked up and younger members started jockeying for position. You seriously can't arrest your way out of violence.

Of course, don't forget the inconvenient truth that Hurst doesn't hold press conferences to address and that WLBT and other media outlets ignore: Jackson's spike in homicides coincided almost perfectly with his announcement in late 2017 of Project Eject, with the then-Jackson police chief next to him, soon followed by high-profile sweeps, apparently rounding up people for more than gun violations, which is what Project Eject is supposed to be about. In fact, his office apparently invited then-Ledger-now-WLBT reporter Apel along on the sweeps to visually capture men with their faces pressed to porches and in handcuffs.

However, after many months of asking for it, we've never gotten a list of everyone arrested and for what charge. Why the secrecy? Put simply, there is no evidence that Project Eject has prevented any violence in Jackson, although it makes for good fodder to lambaste black leaders in ways that are disingenuous at best.

WLBT should be ashamed for being the mouthpiece for such empty crime rhetoric. I won't hold my breath because, you know, ratings.

Donna Ladd is the co-founder, editor-in-chief and CEO of the Jackson Free Press. Follow her on Twitter and read her blog at donnaladd.com. Email truth-to-power story tips to [email protected]