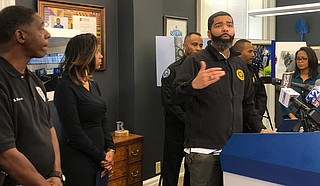 Curbing violence in Jackson requires deep, structural solutions, Mayor Chokwe A. Lumumba said last Friday. Addressing reporters in the wake of high end-of-year homicide rates, Lumumba highlighted his administration's efforts to curb violence in the city through a variety of mechanisms. But he also emphasized the futility of only trying to out-police crime and called for greater legislative action around guns. Efforts to end violence, he added, must also include efforts to alleviate poverty and equip communities with conflict-resolution skills, both factors that the mayor said contributed to the city's high crime rates.

"The issue that creates more sleepless nights for me than any other issue that I must address is that of public safety of our citizens," Lumumba told reporters at City Hall on Jan. 10.

Lumumba said that his administration has tried to improve public safety by recruiting more police officers. He pointed to the fact that the Jackson Police Department had graduated its 57th class—its first recruiting class in over three years—during his tenure. The department graduated a second cohort last fall and will graduate another class in 2020.

In addition to addressing staff shortages within the police department, Lumumba discussed the recent installation of cameras and blue lights in high crime areas in the city. "Real crime centers," as they are called, are intended to deter crimes and help police investigate crimes that have taken place.

But Lumumba also acknowledged that heightened police presence is not enough to prevent crimes. "The problem has already taken place by the time police get there," he said.

Instead, he emphasized the importance of addressing the root causes of violence in Jackson and elsewhere so as to prevent the cycle from unfolding again.

"If you've done nothing to affect the conditions which have led to crime, then even when you arrest someone by 5 o'clock, you will have someone standing in their place by 6 o'clock," the mayor said.

To address the underlying conditions that can escalate minor disputes into violent encounters, Lumumba and his sister, attorney and activist Rukia Lumumba, discussed the city's efforts to implement a research-backed violence-interruption and credible-messenger initiative.

Following the Cure Violence model pioneered by former World Health Organization epidemiologist Gary Slutkin, the initiative is based on the premise that violence is an epidemic. Curing it requires identifying and treating those who show symptoms of the disease so as to prevent the virus from spreading.

Credible messengers conduct on-the-ground counseling to deter at-risk young people and adults from partaking in criminal activity, especially in the aftermath of violence, which can lead to further retaliation. The model requires that credible messengers—people who have been victims or perpetrators of violence, frequently both—come from the same community as those they are trying to counsel so that their advice resonates with those who need it the most.

The initiative aims to invest in the community in other ways as well, through employment opportunities, youth enrichment programs and conflict-resolution training, among other programs.

This year, the City has set aside a small amount of money towards the initiative, while the program continues to fundraise through other means, including philanthropic contributions. Studies show that with adequate funding and a full-time, trained staff, credible-messenger and violence-interruption programs can work. But funding remains the biggest obstacle to implementing a sustainable program in Jackson.

The mayor said that efforts to curb gun violence are more difficult in a state with lax gun control laws.

"When we have press conferences that speak to or celebrate the removal of illegal weapons while simultaneously defending the policy that allows those guns to be brandished every day, that is an obvious contradiction," he said.

The mayor was likely referring to recent remarks by U.S. Attorney for the Southern District of Mississippi Mike Hurst. Hurst held a press conference on Dec. 23 during which he blasted Jackson public officials for being too soft on crime while announcing 25 recent arrests through a new joint anti-violence task force called Project Guardian.

"That is an obvious contradiction that no one can defend or support. And so we don't want to point fingers, we want to come together," the mayor said.

"We've done the data, we've investigated the cases—no one else—and we have learned that (most violent incidents) are due to interpersonal relationships. When you have high instances of violence in domestic circumstances, how do you connect that to gang activity? What fear are you creating for the community?" Lumumba asked. "If we ever see an organized criminal activity, then we will address that appropriately," he said, adding that, in some respects, it is easier to address organized crime than it is to address fragmented instances of violence.

"We think that our safety... is important to the safety of everyone throughout this state and this nation," Lumumba continued. He emphasized the importance of instituting comprehensive measures that not only involve law enforcement but also invite the community's input "so that we understand the culture and the issues that the community is confronting."