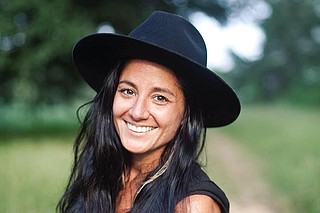 Kristen Allen finds herself tearing up as she reflects on the connections she's made at HeARTworks.

"It truly is heaven on earth," she says. "We have something special, and I want everybody to experience it."

HeARTworks stands for "He works through art." The organization's mission is to reach out to the homeless (Stewpot Community in Jackson) by providing art classes, spreading God's love and fostering community.

Allen has been working at the nonprofit as a volunteer artist for about five years. Every Tuesday from 9 a.m. to 11 a.m., Allen and the other volunteers lead an art class for the Stewpot community, whom she refers to as family. However, Allen doesn't only see her chosen family on Tuesdays. Allen makes herself available to the community throughout the week as well, seeing many each week. She's exchanged phone numbers with people she meets in the area, traveled through the metro in the rain and the cold and provided blankets and food to locals in need during her free time. She says it's all because they're putting a smile on her face.

The mother of two has raised her daughters with the same passion for helping others. They frequently accompany her to volunteer. As a result, they frequently ask their mother about the people they have met while volunteering, use their art projects from school as inspiration for the next art lesson at HeARTworks, think about donating their clothes to other children and pray for everyone they have met before bedtime.

Allen says her goal in creating art and serving others is to never be the star. She lives by a quote by Pablo Picasso, who said the meaning in life is finding your gift and the purpose is giving it away.

"My gift is art. And not just the art of creating and drawing and getting really good at it. But being myself and being genuine, and I'm a lover. I love people," Allen says. "I'm kind of like a modern day hippie," she says with a chuckle.

Allen says she grew up surrounded by the helpers and creatives in her family who taught her to see the beauty in everything. She remembers going to the park with her grandmother, who would ask, "How do people not believe in God? Look at the leaves. They're changing colors right before our eyes." To Allen, that is art, and art encourages healing.

Allen knows that art can boost the energy of any space. She says she'll never forget a woman she met in the Walton Elementary School cafeteria who commented on a mural she created for the school.

"You have no idea how much joy you're bringing to these children," the woman said. "Just the bright colors on this wall has already made an influence on how they smile. And when they read those words, that might be the only positive thing they've seen all day."

Allen has a mural in her own backyard for her daughters and their friends to contribute to because she wants them to grow up to change the world through their own versions of art.

Allen says Jackson, and Mississippi as a whole, is full of artists waiting to be recognized. Although she believes local artists are beginning to receive more exposure, she says she wishes the change would happen faster with more support from the city and better advertising for art hot spots.

In the future, Allen hopes to see more art with words of affirmation around Jackson to lift the spirits of the residents and tourists and better Mississippi's reputation.

"You look at all of these other big cities, and it's colorful. Jackson should be that way," Allen says. "It doesn't take much. It's just a bucket of paint."