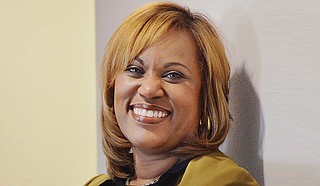 Columnist Adofo Minka argues that the inclusion of outgoing Mississippi Department of Corrections Director Pelicia Hall (pictured), and other women of color, administrators and political figures, in "Black Girl Magic" distorts our understanding of power and justice for those incarcerated in prisons akin to concentration camps. Photo courtesy MDOC.

"Black Girl Magic" is a term floating around the internet and placed in the service of women of color rallying for empowerment, seeking equal opportunity to enter the rules of hierarchy and their own self-aggrandizement. Many believe this slogan improves on the silences in "black power" and is validly wielded against patriarchy (male domination). But a closer look reveals it is an idea that serves those who seek to rule above society. Magic entertains by offering illusions, and magicians have been known to make not just women but elephants disappear. Can BGM make the state disappear and the women who wish to lead it?

On Tuesday, Dec. 31, Pelicia Hall resigned as head overseer of the Mississippi Department of Corrections. Hall's resignation comes amid consternation surrounding a statewide prison shutdown imposed after uprisings erupted in penal institutions leaving several inmates dead and many injured. Often celebrated as the first black woman appointed to helm MDOC, Hall announced she will take her "talents" to the private sector and advocate for criminal-justice reform and better wages and workplaces for the MDOC slave-catcher class, known as corrections officers.

There is something pathologically strange about a black woman who oversaw death in MDOC's concentration camps, who without batting an eye now advocates reform of the same atrocities that she helped proliferate. Doesn't Hall's call for reform show incestuous relationships between reformers, prison managers and political repression? Doesn't this stylized abuse in many sectors, where led by people of color and women, undermine ordinary people organizing properly their own community's judicial affairs? And how was Hall allowed to claim a progressive varnish anyway?

Many people of color and women use the word "progressive" as if there is an assumption of an assertion short of radicalism. In fact, when considered properly, it really means "a retreat from principle." It is a word that furnishes reactionary functionaries with honor.

In the aftermath of 16 deaths in MDOC in August 2018 that occurred during the same month a nationwide prisoner's strike was taking place, I wrote a column entitled "Mississippi's Jails and Prisons: A Powder Keg Waiting to Explode." I don't think the recent rash of prison rebellions that appear to be disconnected and uncoordinated were the blast I was forecasting.

Nonetheless, what has been termed "riots" left the authorities panic-stricken at the Mississippi State Penitentiary at Parchman. They were overwhelmed and had to employ the help of neighboring agencies, including the Mississippi Highway Patrol, to extinguish the rebellion and restore the "order" of tyranny. The angst these events produced in MDOC is well warranted.

Although this surge may not be, for different reasons, the explosion the common people and those who rule over them wish to identify, it is clear that the self-organization of discontent is still unfolding. So long as the authoritarian rule produces the social conditions that exist in prison, the eruption will remain impending. Whoever is caged, and no matter how the conditions deteriorate their tendency toward a right mind, the instinct for survival and freedom cannot be extinguished among most prisoners.

The Mystification of Death Behind Prison Walls

When the string of inmate deaths took place in 2018, Hall explained and evaded her way out of responsibility for deaths on her watch. She talked about how many were a result of natural causes. She said then many of the inmates arriving at MDOC have pre-existing health issues that ultimately cause their demise while in custody. This is partially true, but Hall's attempt to wash her hands of the bloodshed in the facilities she ran must be questioned.

Is it natural for individuals to exist under the stress of physical violence and political repression? Is poorly prepared, unhealthy and nutritionally deficient food natural? What about regular exercise, fresh air and sunlight denied for days? Is medical treatment provided in MDOC adequate for restorative health?

The egregious, if not hellish, conditions that inmates experience cannot be described as anything natural or humane. It is the suffering that bureaucracy works to maintain, though they play around with dubious notions of professional ethics that keeps thousands degraded. This hastens human demise, regardless of what cause and manner of death the coroner's office concludes.

How can all this savagery be justified?

I recall Hall's appointment by proto-fascist Gov. Phil Bryant being met with great adulation among black Jacksonians on social media. When I attempted to clarify the obfuscation of "Black Girl Magic," I was met with scorn and mockery by those intoxicated under a spell, drinking the Kool-Aid of purported black achievement. Multitudes fall into a trance upon seeing the appointment or election of a "first black" to a position of authority when it is a woman who is non-white. Systems of domination actually dictate the actions of black rulers; Hall is not an exception.

During Hall's two-year tenure as commissioner, dozens of black and poor people lost their lives in MDOC custody. They experienced psycho-emotional torture and terrorism as a result of solitary confinement and the practice of conducting routine early-morning contraband raids. Bodies have been broken through forced labor. Family members, many of them black mothers, sisters and wives—no "magic" sprinkles for them—have been heartbroken and left without credible answers under the guise of some ongoing investigation.

Hall has made a career of feeding off pain and suffering. She has done this while gallivanting with some of the most racist elements in Mississippi politics. Why do many of those who oppose the likes of Bryant and outgoing Mississippi Department of Public Safety Director Marshall Fisher on principle then become stupefied when they come face-to-face with Hall who also upholds the regime? Does Hall's melanin freeze these warriors against white supremacy in their tracks? Is this the "excellence" people will castigate others over?

People fail to see the misery is a direct result of the unchecked power of those at the top no matter the color of their skin.

If Hall's administration stands for anything, it is the proposition that the politics of representation in the form of black aesthetics are both ethically and principally bankrupt. Aesthetics are philosophical concepts of beauty and value. And those who frame conquering as "Black Girl Magic" are ugly people, no matter how they do their hair, and how much shea butter they use. No ethics are found behind the identities they wield as social capital.

The BGM pep rallies around public figures like Hall are really tragic. The failed presidential campaign of Kamala Harris is a good example.

From Pelicia Hall to Kamala Harris

If the "Black Girl Magic" cult could celebrate Hall for overseeing the mutilation and killing of prisoners, it also lifted up U.S. Sen. Kamala Harris for president after justifying mass incarceration and police-state murder. The news of Harris' failed bid for the presidency was met with sorrow from many aspiring do-gooders, both black and white.

Before becoming senator, Harris served as a district attorney and the attorney general of California where she championed the politics of law and order, suppressing through incarceration by and large working-class and poor blacks. Prior to her stumping to win the Democratic Party nomination, Harris had been criticized for fighting to keep innocent people on death row.

During her campaign, Harris attempted to do an about-face, arguing she was "a criminal justice reformer." And in Harris' memoir, she claimed that as prosecutor she wanted to "tear it down," it being the carceral state. Relying on the BGM cult having no memory or no ethics, Harris supporters lived by delusions that they were both reformers and killers.

This is an oppressive contradiction, but not an impossible ambition. It is a very common disposition among white politicians to act as if they can be both reformers and killers. However, this dispositionality is more quickly recognized as preposterous. Nevertheless, Harris' observation of how women of color's social identities work under American Exceptionalism has allowed her contradictions to be overlooked by wrapping of her campaign in "sisterhood." She trusted those who oppose racism and patriarchy—especially women of color—would be easily fooled or have no integrity.

As a U.S. senator, Harris never deviated from the supremacy of the imperial script. She was one among many of that pitiful institution some call the "Congressional Black Carcass" that voted to give law-enforcement officers special protected status in the federal "Blue Lives Matter" bill. No amount of lies and treachery could get some to disavow their support for reactionary politics termed "progressive." They looked past her record and went hook, line and sinker for the BGM trope. But this is not the first or last time that magic reconciled black lives and "Blue Lives Matter." Hillary Clinton and Michelle Obama helped justify that as well.

From Hillary to Michelle: BGM A Mask the State Hides Behind

The concept of "male domination" of women is a weapon used to obscure differences in interpersonal disagreements, whether they be political or not, with systemic authoritarian rule. Too many times the concept of patriarchy is wielded to describe men who are rude, disrespectful and mean-spirited to women.

Yes, patriarchy can have these characteristics, but a man is not a patriarch simply for having a spirited disagreement with women. Both women and men can talk at various decibels; it doesn't define a system. Talking loudly, whether by men or women, is not patriarchy, but a patriarch surely might threaten a woman or a whole ethnic group. Telling a woman why you think their political analysis is off-base is not patriarchy. When you raise interpersonal conflict to the level of patriarchal domination, some of the most marginalized men in society are blamed for upholding patriarchy, while women, both black and white, who help to advance coercion and killing on behalf of the state go unquestioned.

When Hillary Clinton, Barack Obama's secretary of state, led the charge to bomb Libya into oblivion on the continent of Africa and chanted "Black Lives Matter" at her presidential nomination, I saw many white and black women hashtagging #IMWITHHER. When Michelle Obama argued absurdly that childhood obesity was a civil-rights issue to pave the way for facilitation of police murder and mass incarceration by her husband known for his civility, the BGM cult said both were charming.

They revelled in relationship goals that fueled false models for anyone's family. Michelle Obama said, "When they go low, we go high." With her husband's mass deportations of immigrants and targeted assassination of people of color from the sky that anticipated those of Donald Trump's, one has to wonder who is low and who must be getting high?

Calling individual men patriarchs for challenging women's reactionary conceptions of progress and success has become, for too many people, an ironclad shield. And when women of color do this in the BGM cult, their contempt for working class, unemployed and incarcerated people of color (mostly men of color) cannot be disguised. Some of these "magicians" say they love black men regardless of their social class while they cheer bewildering managers of the imperial, police and carceral state. Like the Obamas, their contempt for toiling and unemployed men of color who supposedly don't behave or work hard enough expresses the tough love of a slave driver.

The cheap and opportunist dialogue around gender equality (not the real fight against patriarchy) has horribly confused things. The coercion of the state is not disappearing. Where women of color claim to be social reformers but are only prosecutors, wardens and imperial apologists for killers, we should practice making sure that "Black Girl Magic" no longer is successful at performing the art of illusion, making the clarification of our liberation struggle disappear.

Adofo Minka is an attorney who lives in Jackson.