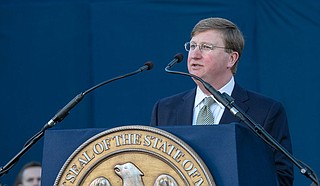 Gov. Tate Reeves promised to be a beacon of optimism for all Mississippi, but his speech addressed some of the state's most dire challenges. Photo by Candace Harris

New Mississippi Gov. Tate Reeves closed his State of the State address Monday night by promising to "sing the gospel" of Mississippi, after rejecting pessimism, pettiness, ivory towers, gender studies and the "arrogance" of "metropolitan narcissists," not necessarily in that order.

At times, Reeves' address vacillated rapidly from the warm language of inclusion to vituperative mocking of "conceited" coastal elites. Elsewhere, the governor touted the state's progress while acknowledging some of its critical challenges in public welfare.

Reeves used the address to announce the closing of Parchman prison's Unit 29, the most deteriorated and controversial cell block in the prison. Unit 29 is the site of the recent suicides that have put the prison in the national spotlight. Interim Department of Corrections Commissioner Tommy Taylor told the press after Reeves' speech that Unit 29 inmates now have access to warm showers, drinkable water and working toilets. Unit 29 will continue housing inmates during the transition period. The section holding death-row inmates will remain in operation as its building is in working condition, Taylor said.

Senate Corrections Committee Chairman Juan Barnett, D-Heidelberg, told the Jackson Free Press that he supported the governor's call to shutter Unit 29. "It's a hard decision," Barnett said after Reeves' speech, "but it's a decision that had to be made."

Reeves opened his remarks on Mississippi's corrections system with the story of Rev. Eddie Spencer, himself incarcerated at Parchman, who survived his stint in prison and went on to deliver the benediction at the governor's inauguration. "We must get this right," Reeves said, "to prevent the next Reverend Spencer from losing their life needlessly in a Mississippi prison."

A Promise to 'Mississippi's Kids'

Reeves acknowledged that these children have been "historically, woefully underserved" by Mississippi's government, promising to "promote a culture of life" through investment in foster care and adoption. The governor said progress in this realm may be private and complicated, but assured Mississippians that "we will do the necessary work to ensure that these children are not twice-abandoned."

Much of what the Mississippi's child-welfare system needs is indeed complicated. An outdated and insufficient data-management system stands between the Mississippi Department of Child Protection Services and successful adoption of its court-mandated metrics. The agency must also address high caseworker turnover rates statewide.

Reeves will have the opportunity to appoint a new commissioner for the child-protection agency this year who will set its priorities. Previous Chief of Staff Taylor Cheeseman holds the reins in interim, stepping in for Commissioner Jess Dickinson, who left alongside Gov. Phil Bryant.

Reeves spoke at length about foster care and adoption, but made no mention of the broad effort to reduce child separations, especially those due to poverty and neglect. Lea Anne Brandon, communications director at MDCPS, confirmed to the Jackson Free Press that the agency's leadership had yet to sit down with the governor to explain "our trauma-informed philosophy," but expressed optimism over child welfare's inclusion in the State of the State speech. The governor's opinion on the current trends in child welfare, then, remains to be seen.

Holding the Line on School Choice

The address touched heavily on Reeves' planned education targets, reiterating his goal to make Mississippi "the number-one state in the country for [National Board] certified teachers." Reeves chalked the state's current progress up to "opportunity, choice and access" reforms, and called for Mississippi to "hold the line against those who would undo the very reforms that are lifting children up."

It is unclear if Mississippi's support for school vouchers and funding for private education is responsible for the state's recent metrics in educational progress, however. The largest gains come from Mississippi fourth graders' progress in reading and math. The 2013 Literacy Based Promotion Act created a "third grade gate" that requires a literacy test for admission into the fourth grade. The result of Mississippi's adherence to this requirement is a higher retention rate of third-grade students than any other state in the nation. Experts suggest this may create a survivorship bias that inflates the educational attainment of fourth graders without improving long-term outcomes.

Reeves returned to the topic of increased teacher pay in the speech, promising to support legislators in their efforts to allocate a significantly higher salary to public-school educators. "I want all of you to know that my priority is simple," Reeves said. "Let's pay our teachers as much as we can possibly afford. Send me a budget that does that, and I'll stand beside each of you to sign it with joy."

Last session, the Legislature passed a $1,500 pay raise for teachers after a bitter fight in both chambers. Reeves, for his part, sparred with Democratic lawmakers over funding for private schools as a part of that package. Republicans slipped $2 million for school vouchers into a funding bill, passing it through the House minutes after secretly submitting the addition.

In addition to promises of higher teacher pay, Reeves also called for more Mississippians to eschew the traditional four-year degree in favor of workforce training. "We can let the east coast have their ivory towers," Reeves jeered. "We can let the west coast have a generation of gender-studies majors. We will take more jobs and higher pay!"

Obsession with the four-year degree, Reeves said, is a "malicious myth" borne from "the arrogance of an elite class that sees their comfortable life as the only ideal. They are the same metropolitan narcissists who look at our state and sneer." The governor promised to serve as an ambassador for the strength and skill of Mississippi's workers.