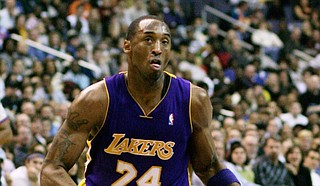 C. Liegh McInnis writes that Kobe Bryant was talented, diligent and fearless. Most people have one or two of these qualities, but only the most productive have all three, he says. Photo by Keith Allison 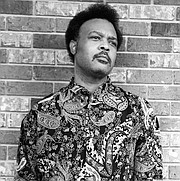 Sports were as critical to my childhood as art. I was a mediocre three-sport athlete, emphasis on "mediocre." Still, I learned many lessons from sports that continue to help me as an artist and an adult. Kobe Bean Bryant's life is another example of how sports can be used to teach multiple lessons. His life was an example of mental strength, the artistry of athletics and how he never failed to take advantage of all opportunities, even when they came after missteps and mistakes. Those qualities teach young people that success means not allowing our iniquities and our failures to define us. This understanding can greatly reduce issues such as school dropouts, teen pregnancy and other missteps to be the most defining moment of their lives.

First, Bryant was talented, diligent and fearless. Most people have one or two of these qualities, but only the most productive have all three. He dared to dream that he could be the best when the vast majority doubted that he could be better than good. It can be difficult to remember that the majority of folks perceived Bryant as more hype than star. I, for one, thought that Shaquille O'Neal was making a great mistake by leaving Penny Hardaway and the Orlando Magic to join forces with Bryant and the very subpar Los Angeles Lakers.

Like the greatest among us, though, Bryant had self-belief, intelligence, and a work ethic that enabled him to surpass the doubters and even his own dreams. From shooting four airballs to end a 1997 playoff game his rookie year to becoming known as one of the most clutch performers of all time, Bryant always attributed his growth and success to working daily to become better. As he once stated: "I can't relate to lazy people. We don't speak the same language. I don't understand you. I don't want to understand you."

Each year Bryant increased his productivity until he and O'Neal became the last tandem to three-peat as champions. Later, without O'Neal, he earned MVP honors and led his team to another championship. From doubted to undeniable, Bryant is an example of what happens when one combines diligence and self-belief with talent, retiring as the third all-time leader in points scored. As such, when more young people are taught to love themselves and work for what they desire, issues such as drug abuse and theft will be greatly reduced.

Moreover, he was the rare athlete who was able to transcend athletics and become an entertainer and artist whose work made people see new possibilities about what the mind and body can do. He was an athletic visionary who gave new vision to those who followed him in the same way that Michael Jordan and others gave him new vision. Whether it was tremendous shot-making, amazing athleticism or an unequaled competitive drive, Bryant never failed to provide something of which basketball lovers had never seen before, even those like me who cheered for other teams.

ESPN "First Take" anchor Max Kellerman often states that "Kobe Bryant is the best 'bad shot' maker of all times," which means that Bryant was a master of making shots that almost no one else would even attempt. However, unlike Jordan, Bryant was more like Tiger Woods, Stevie Wonder and Michael Jackson as they became national names as young people. The world knew Bryant at the age of 17. I would argue that only LeBron James has had more pressure than Bryant as a childhood phenom in the world of athletics. (Woods was known at an early age, but he never had the pressure of being the face of his sport until after he won a major title.)

Bryant has, in most cases, surpassed the high expectations for him the moment that NBA Hall-of-Famer Jerry West, who was even more successful as an NBA executive, identified Bryant as the successor to Jordan. Five championships later, it seems that West and Bryant were right in their vision that enables others to dream of even more. This can produce more visionaries to solve problems such as cancer, global warming and alternative fuel sources.

Specifically, Bryant became one of the biggest supporters of the NBA/WNBA Lean-in Campaign, which urges males to support women in their athletic and all-around endeavors.

Then, in retirement, Bryant was able to do what so many are not—find happiness and productivity off the court. He won an Oscar in retirement for an animated short film, "Dear Basketball," and his program "Detail" on ESPN+ and ESPN.com became one of the most popular shows for basketball analysis.

"Detail" is loved because Bryant's two biggest characteristics drive it: intelligence and work ethic. His weekly analysis is from the mind of Professor and Coach Bryant, which is why so many current and former players love it, as well as the fans. Clearly, Bryant learned how to nurture his entire self, becoming a whole person, especially as a father to his children and a mentor to many others seeking his wisdom. NBA champion and scoring genius Kyrie Irving has identified Bryant as his favorite player who inspires him to be the best he can be. And Bryant became such a mentor to him that Irving was unable to play after learning the news of Bryant's death. Bryant inspiring people to become mentors can reduce the number of young people who join gangs because they will know that they have it in them to create or locate the opportunities that they need.

Ultimately, Bryant's death at 41 teaches that people must strive for quality of life and not quantity of life. It is the dash between one's birth and death that signifies who one is and what one means to others. Bryant's dash will be a blueprint of how to get the most of what one is given. His legacy is that human beings are pie charts with multiple slices that combine to define who we are. Those who learn this lesson will be the ones to push themselves and their communities to reach their full human potential. We must always remember that studying history is not seeking and celebrating perfect people but learning how flawed beings worked daily to become better today than they were yesterday. As such, Bryant's life can help others avoid the ills of drug abuse, teen pregnancy, gang culture, high school dropouts and incarceration.