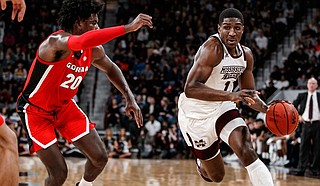 GAINESVILLE, Fla. (AP) — Reggie Perry's mother and sister were on hand for his game at Florida, about a two-hour drive from his hometown.

Perry treated them to one of his best collegiate performances.

Tyson Carter chipped in 12 points, including seven straight in the second half to turn the game. The Bulldogs (13-7, 4-3) rallied from 16 points down to notch their first road victory of 2020.

“I thought Reggie Perry was absolutely phenomenal tonight," Bulldogs coach Ben Howland said. “We really did a great job of getting him the ball."

Perry grew up in Thomasville, Georgia, about 140 miles from Gainesville. It's safe to say he treated this like a homecoming. The 250-pound sophomore made 9 of 14 shots, including all three from 3-point range. He made 6 of 7 free throws to go along with eight rebounds and seven turnovers.

It seemed impossible for Florida (12-8, 4-3), which has dropped three straight and blown early leads in the last two.

“It was one of the strangest games I've been a part of in terms of how different each half was, both offensively and defensively,” Florida coach Mike White said. “They had their way with us in the second half."

Florida was hot early, shooting 58% in the first half and making 8 of 14 from 3-point range. White's freshmen were particularly on point. Scottie Lewis scored 10 of Florida's first 12 points. Tre Mann made both of his 3s. And Ques Glover and Omar Payne even chipped in.

The Gators were up 36-20 with six minutes to play in the half, then Kerry Blackshear Jr. went to the bench with two fouls. Perry took over from there, and Florida offered no response.

The Bulldogs quickly erased a 10-point halftime deficit by making 12 of their first 17 shots (71%) after the break and built a comfortable lead.

Florida had chances down the stretch. Trailing 70-66 with about three minutes remaining, Keyontae Johnson missed a layup from point-blank range and Noah Locke dribbled off his foot on the following possession.

Woodard drained a 3 on the other end to get the lead back to seven.

Perry has been unstoppable of late in SEC play, scoring 23, 22, 26 and 27 during State's winning streak.

“His 3 shot tonight was really going,” Howland said. "You can see he's going to be a really good 3-point shooter at the next level. ... I'm just so happy for how he's playing for us."

Mississippi State: The Bulldogs really could be enjoying an impressive year if not for all the close losses. Their last two were one-point games, coming up one shot short at LSU and Oklahoma.

Florida: White's job status is suddenly being openly questioned. The Gators gave him a contract extension after last season, meaning he's far from being in jeopardy, but the lackluster results with his most talented team has prompted growing criticism.

Florida paid tribute to late NBA star Kobe Bryant by draping two replica No. 24 Lakers jerseys over seats along Florida’s bench during warmups. The jerseys were removed just before the opening tip.

Mississippi State: Hosts Tennessee on Saturday. The Bulldogs have lost four in a row and 10 of the last 12 in the series.

Florida: Plays at Vanderbilt on Saturday. The Gators swept the season series last year for the first time since 2011. The Commodores are the only SEC team still winless in league play.