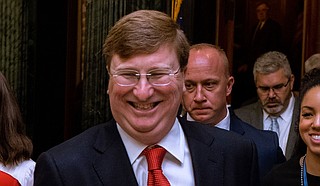 Columnist James Thomas writes that Gov. Tate Reeves was wrong in his State of the State remarks about four-year colleges, and calls higher-education officials to task for not calling out the governor for the remarks. Photo by Drew Dempsey

There has been a malicious myth spreading across our country for many years: That the only way to achieve the American dream is through a four-year university degree and a career behind a desk. That myth comes from the arrogance of an elite class that sees their comfortable life as the only ideal. They are the same metropolitan narcissists who look at our state and sneer. They have tricked millions of Americans into taking on mountains of debt and wasting precious years—all based on a conceited lie. We must break the cycle. In Mississippi, we can be at the tip of the spear.

Reeves' willful ignorance, however, is not the gravest sin. That belongs to higher-education officials across our state, whose deafening silence speaks volumes. To date, not a single university administrator from any of Mississippi's eight four-year public universities, nor a single trustee from the state's Institutions of Higher Learning, has offered a corrective to Reeve's maligning of the facts. Not a single university administrator or higher-education official has publicly defended the faculty, departments and programs Reeves openly targeted in his address.

As a university professor at the state's public flagship university, I find Reeves' comments troubling. Yet I am far more offended by the repeated failure of so-called university leaders to respond to these attacks on their faculty, and on the very mission of higher education.

Universities are not, nor should they be, job-training programs. From its founding, a liberal-arts education was understood as essential to promoting freedom of thought, expression and inquiry. As recently as the 1970s, a university education was still understood as necessary for developing an engaged citizenry.

When, in the mid-20th century, American higher education became more open to women, minorities and the working class, this constituted a radical moment for democracy. Not because more people than ever before now had a pathway to economic opportunity, but rather because they had a pathway to intellectual freedom, and with it came an understanding of the very values—and their contradictions—that undergird our democratic experiment. These values—and the need to understand them and their complexities—are as important today as they have ever been.

In his address, Gov. Reeves gets only one thing right. Our students today are taking on more debt than ever before, making their pathway to intellectual freedom and understanding more difficult, if not impossible. Yet Reeves must believe we are blind, foolish or both to not recognize the real culprits responsible for the crisis of debt our students face.

State of Mississippi spending per student has decreased by almost 34% since 2008, the fifth largest cut to higher education in the nation. As a consequence, since 2008 the average tuition for our eight, four-year public institutions has increased by more than 42 percent. Mississippi is among just four states in the nation that cut funding by more than $500 per student between 2017 and 2018, while over that same period raised its average tuition by more than $300.

As a university professor, I see first-hand how these trends affect my students. My students who are first-generation or working class are no less interested in a four-year degree than their more affluent peers. But unlike their peers, they often must balance a full-time academic schedule with part-time, and in some cases full-time, employment. Their economic circumstances constrain their ability to participate fully in the academic and social scene of the university, making their pursuit of free thought, expression and inquiry more arduous.

As a whole, the increased burden to fund their higher education makes students from all socioeconomic backgrounds less inclined to embrace the traditional role of a liberal-arts education, and instead seek those programs and degrees that they believe give them the greatest return on their investment. Courses are transformed into market transactions. Students increasingly behave as entrepreneurial investors. Courses and programs that ostensibly offer clear, marketable skills are seen as "good investments." Courses and programs that offer opportunities to consider larger, humanistic questions are in return perceived as "risky."

Many of us—faculty, staff and students—actively resist this transformation even as it unfolds before us. We recognize that, as Reeves himself stated, a well-rounded education provides for a "a life well-lived." We understand the threat these trends pose to our universities, of course. More importantly, we recognize the threat they pose to our shared values and democracy as a matter of practice.

Universities are historically the sites where some of our most innovative and truly radical ideas have been seeded, nourished and allowed to flourish. For all of their problems—and there are many—Mississippi's public universities remain its greatest public good. That not a single university leader has risen to defend them in the wake of Reeves' attack is evidence of how significantly the university's character and mission have been harmed, as well as proof that now, more than ever, the rest of us must rise to the occasion.

If we remain silent and allow Reeves and others to degrade our institutions and our colleagues, we cede the terrain of ideas that is rightfully ours to those who would suppress those ideas, and the power within them, for personal and political gain. In doing so, we debase ourselves.

James M. Thomas (JT) is an associate professor of sociology at the University of Mississippi. He is the author of four books and more than 20 peer-reviewed journal articles, book chapters, and other essays on the causes and consequences of racism in America and abroad. JT can be reached at [email protected], or on Twitter @Insurgent_Prof.